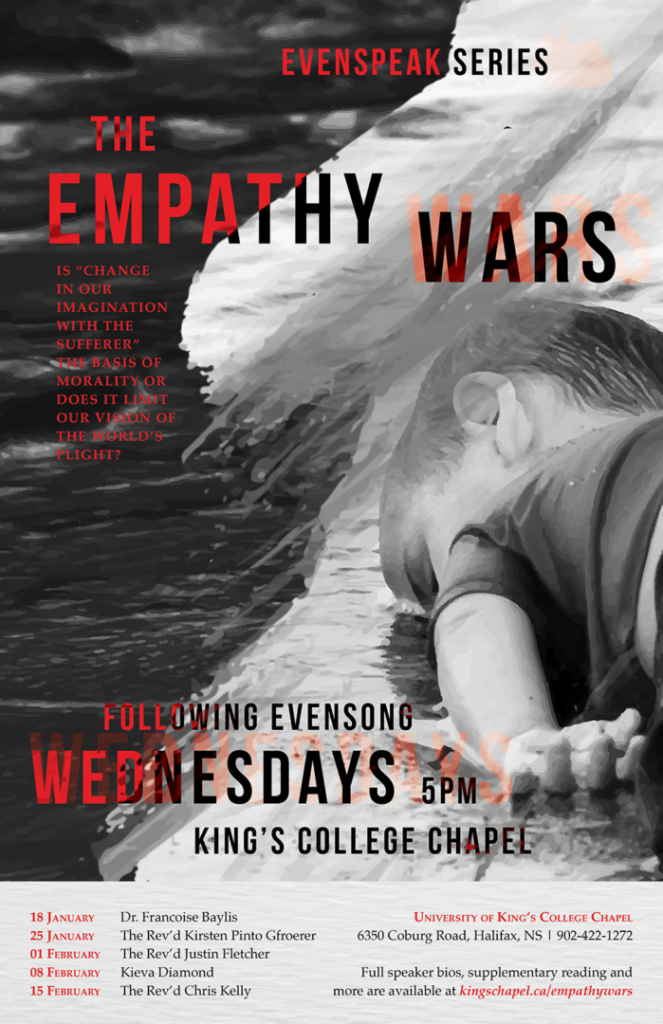 Do we have the capacity to empathize with those unlike ourselves, or must we adopt a rational compassion, which trusts reason to be the proper guide for right actions?

In the eighteenth century, Adam Smith argued that the basis of morality was our capacity to “change places in our imagination with the sufferer.” But recent philosophers have warned us that empathy is a dangerous emotional force that draws us towards identifying with the suffering of particular individuals while we blithely ignore the plight of distant strangers or people outside our ‘tribe’. Reason and objective judgement about how to do the most good for the most people, not a self-focused empathy, must be our primary moral guide. Our speakers will address us for 15 minutes following 5pm Evensong at the King’s College Chapel.

Kieva (Bearden) Diamond was raised on the North Mountain of Nova Scotia, in Harbourville, where she once built a stackwall cabin. She was raised and baptized in the Church of Christ, and is now a parishioner at St. George’s Round Church. Before her BA in Classics at the University of King’s College and Dalhousie University, she spent a transformative year living and working in Chad in association with the Mennonite Central Committee. Kieva has a passion for literature, above all the novels of Jane Austen and George Eliot. Theologically, her biggest influences (besides her parents!) have been George MacDonald and C.S. Lewis. She is currently being kept on her toes by the challenging, baffling, scary, hilarious and delightful job of raising three young children in a world that is also all of those adjectives (challenging, baffling, etc.). Once the youngest of her three sons is in school, Kieva hopes to resume writing, working on children’s fiction among other writing projects.