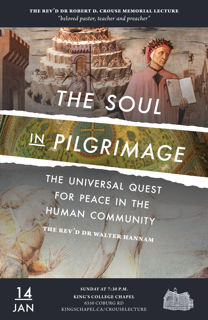 It is fitting that the King’s Chapel establish this Lecture Series in memory of our beloved pastor, teacher and preacher. Established in 2016, a lecture is given each year on or near 15 January, the Dies Natalis of the Rev. Dr. Robert Crouse, BA’51, DD’07 of blessed memory, scholar and priest.

Just a few months after his birth in Winthrop Massachusetts, 1930, Robert Crouse’s family moved to Lunenburg County’s Crousetown, where he lived until his death in 2011.  Robert Crouse’s schooling began in the one room school in Crousetown, which still stands next to St. Mary’s Church. After graduating from King’s in 1951, he earned an S.T.B. (cum lauda) from Harvard Divinity School, Master of Theology (1st class honours) from Trinity College, University of Toronto, and a Ph.D. from Harvard in 1970. He joined the Classics Department of Dalhousie in 1963 and later joined the faculty of King’s College, Halifax, where he taught in the Foundation Year Programme. For Kings students and faculty alike he became a voice of wisdom, knowledge and inspiration through his academic teaching and his sermons at Thursday Chapel. An international scholar and lecturer, he published over seventy articles, reviews, and translations. His treatment of Dante became a formative element of the Foundation Year Programme, also enhanced by the lectures on his beloved Palestrina and Bach. For several years Dr Crouse was “Visiting Professor of Patrology, Institutum Patristicum Augustinianum, Pontifical Lateran University Rome,” the first non-Roman Catholic to be so appointed.

Through his renowned sermons, great learning, and gentle humility, Robert educated and inspired a whole generation of priests and bishops, who are now serving in parishes and dioceses throughout Canada, the United States and Europe.  An organist and harpsichordist, in the early 1970s Dr Crouse established the current choir at King’s whose execution of both polyphony and plainchant continues to enhance and shape the poetic liturgy of the Kings Chapel.

A native of Nova Scotia’s Annapolis Valley and alumnus of the University of King’s College, Father Hannam is the current Vicar of St. Bartholomew’s Anglican Church in Regent Park, Toronto. Prior to his appointment at St. Bart’s, he held the chair of Theology and Anglican Studies at the College of Emmanuel and St Chad in Saskatoon, Saskatchewan for seven years. He hold a degree in Classics and Philosophy from the University of King’s College, as well as degrees from Dalhousie University (M.A. Classical and Patristic Philosophy), and Boston College (Ph.D. Theology). Father Hannam was made Deacon and ordained to the Sacred Priesthood in the Diocese of Saskatchewan, where he served as Chaplain of St Mary’s Church, Prince Albert; he also served as Honorary Assistant at All Saints’ Parish in the Diocese of Saskatoon.

Fr. Hannam counts himself among the generation that was educated and inspired by Fr. Robert Crouse’s teachings at King’s, and we are honoured to have him speak at the third annual Robert Darwin Crouse Memorial Lecture.