With sadness, King’s must announce that in accordance with public health recommendations to suspend large gatherings of people, this concert has been cancelled. Refund information for ticket holders will be available shortly. Please email kingschorus@gmail.com with any questions. 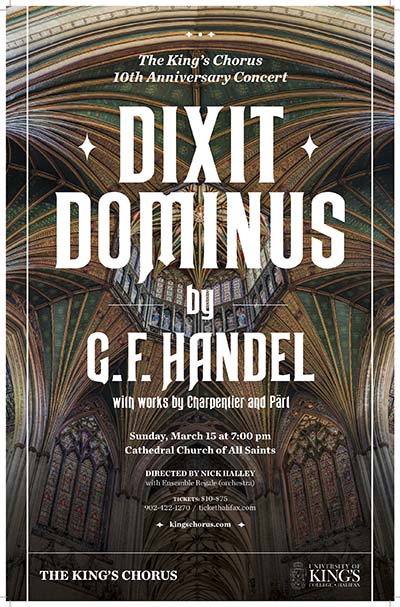 The King’s Chorus, directed by Nick Halley, will present their 10th anniversary concert, Dixit Dominus by G.F. Handel, on Sunday, March 15 at 7 pm at the Cathedral Church of All Saints, Halifax.

Dixit Dominus is a setting of the Latin text of Psalm 110 in nine movements, scored for five-part chorus, five soloists, strings and continuo. George Fideric Handel (1685-1759) composed this piece in 1707 at the age of 22 while living in Italy. The concert will also feature a setting of ‘Dixit Dominus’ by M. Charpentier, the Marian anthem ‘Salve Regina’ by Arvo Pärt, and Gregorian chant.

The Chorus will be joined by five accomplished soloists including Philippe Gagné and Janelle Lucyk, Ensemble Regale chamber orchestra, and Paul Halley on the continuo and organ, to present their 10th anniversary concert.

The King’s Chorus is a choral society of the University of King’s College comprising seventy students, faculty, staff, and community members. They rehearse great choral works from various traditions and perform a concert each semester.