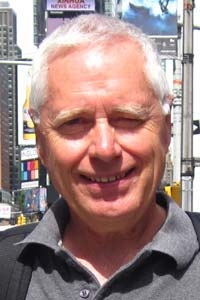 Geoff became a journalist instead of a scientist by accident. The local radio station called him up and asked him to announce-operate the weekday evening shift soon after he started Grade 12.

Two years later he moved to Charlottetown to work as a reporter on the Guardian with people like Nick Fillmore, Nancy White, Al Holman and Mike Duffy, and to begin freelancing for the CBC. All of the above became well known on the national stage. Geoff decided to go another route and wound up as managing editor of The Crier, an early attempt to bring alternative journalism to Halifax and the Maritimes.

Eventually, after a couple more print jobs, he joined the CBC as a writer, quickly trained as a radio producer, and became a founding producer of Information Morning in Halifax. In the 40 odd years since he has among other things, worked as a freelance writer, TV reporter and news producer, a radio documentarist, and the executive producer for news and current affairs Maritime region.

He is married, has three children, two still in school, and two grandchildren. In asides from journalism, he has been interested in theatre, and at different times has established an art gallery and two restaurants, mostly because he likes art and good food. He is sort of retired.