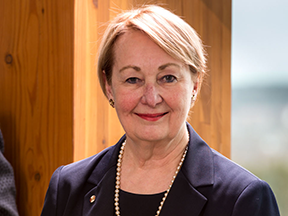 Dr Gwendolyn Davies is currently emerita professor and dean in English and the School of Graduate Studies at the University of New Brunswick and also serves as one of the university’s orators.

During her career she has served on numerous professional committees, including as president of the Canadian Association of Chairs of English, president of the Bibliographical Society of Canada, board member of the Northeastern Association of Graduate Schools (USA), and member of the Academic Advisory Committee of the Maritime Provinces Higher Education Commission. She was a visiting senior resident at Massey College at the University of Toronto in the autumn of 2008 and an academic visitor at St. Hilda’s College, Oxford, in the Hilary term of 2009.

She is the author/editor/co-editor of five books, including Studies in Maritime Literary History, and, with Carole Gerson, Canadian Poetry from the Beginnings Through the First World War, she has also authored over 50 book chapters, introductions, and articles and is general editor of Formac’s Maritime Fiction Treasures reprint series.  A member of the Royal Society of Canada since 2004, she has served on various Royal Society committees nationally and regionally. She is currently working on a book on Loyalist literary women in late 18th century Maritime Canada.

Among other community and church voluntary roles, Dr Davies is Secretary of Bishop and Chapter at Christ Church Cathedral, Fredericton.