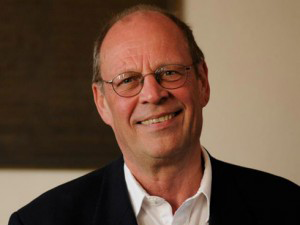 Paul was born in Romford, England and received his early musical training in Ottawa, Canada, where he studied piano, organ and singing. At the age of sixteen, he was made an Associate of the Royal Conservatory of Toronto. Having been awarded the organ scholarship at Trinity College, Cambridge under Dr. Richard Marlow, he received his M.A. with prizes in composition and performance, and was made a Fellow of the Royal College of Organists, winning first prize in the College examinations. Via a circuitous route involving two years teaching in Jamaica, W.I., Paul became Organist and Choirmaster at The Cathedral of St. John the Divine in New York City where he served for thirteen years, 1977 to 1990, transforming the Cathedral’s music program into a rich combination of classical and contemporary music. Concurrent with his tenure at the Cathedral, Paul became a principal member of The Paul Winter Consort and earned four Grammy Awards for his contributions as featured writer and performer on many Consort recordings.

Following his departure from the Cathedral of St. John the Divine in 1990, Paul settled in rural northwestern Connecticut and founded Joyful Noise, Inc., the non-profit organization which administers the children’s choir, Chorus Angelicus and the adult ensemble, Gaudeamus. These choirs continue to bring their celebrated sound to audiences throughout North America and Europe. Paul was also Director of Music at Trinity Episcopal Church, Torrington, CT where he conducted a 30-voice, semi-professional choir, mentored Organ Scholars from Yale University’s Institute of Sacred Music, and expanded the church’s music ministry to include the Trinity Arts Series.

In July 2007, Paul relocated to Nova Scotia. He is Director of Music at the University of King’s College, Halifax, where the Chapel Choir is gaining a reputation under his direction as one of the best choral ensembles in Canada. At Atlantic School of Theology, Paul holds the position of University Musician. Paul hopes to develop a School of Sacred Music in conjunction with these appointments.

Paul’s compositions and recordings are produced and distributed by Pelagos Incorporated for which Paul acts as Creative Director. He is frequently commissioned to write new works in a range of genres. Compositions have been commissioned, performed and licensed by many notable artists and organizations including Sony Entertainment, Windham Hill/BMG Music, Hal Leonard, the New Jersey Symphony, John Williams and the Boston Pops Orchestra, The Louisville Symphony, Canadian Brass, and CBC. Paul’s recordings and performances are frequently broadcast on NPR and the CBC.