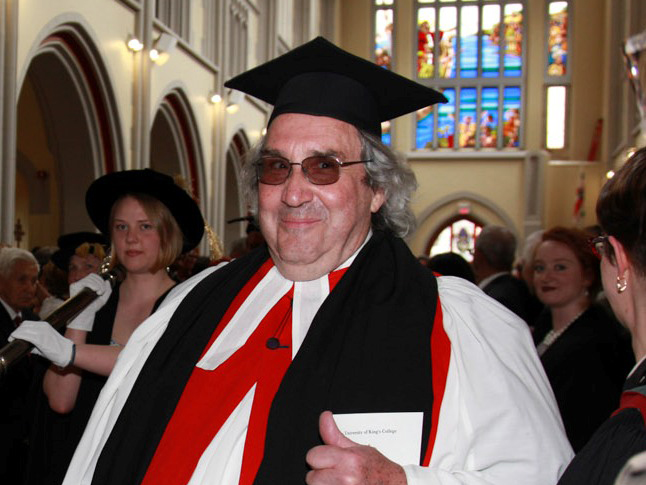 Born and raised in rural Nova Scotia, I received my primary and secondary education in the public schools here. I studied Classics and philosophy at King’s College and Dalhousie University, graduating with First Class Honours and the University Medal in Philosophy in 1965 and delivering the Valedictory Address at the King’s Encaenia. Going on to Trinity College (as Cumming Fellow), the University of Toronto, and Oxford University,  I added theology to my studies. Teaching my first course at Dalhousie in 1965 (second year Greek), more than forty-five years—including four years at York University—have been devoted to university teaching. Several years were spent conducting research in Rome and Paris and I have held research positions at the universities of Oxford, Cambridge, Harvard, and Boston College. I was a resident Librarian (fellow) of Pusey House, Oxford, during 1979 and 1980. I am a member of St Peter’s and St Cross Colleges, Oxford, and of Clare Hall, Cambridge.

When a student at King’s, I was a founder of the Student Union and one of its first presidents. I returned home from Toronto to be the founding Director of the Foundation Year Programme (1972-78) at King’s and, from Oxford, to be Librarian of the College (1981-93), during which time I designed and built its new Library. At King’s I chaired the committee which presided over the creation of the Early Modern Studies and History of Science and Technology Programmes; from 1972 to 1990, except when away, I was Professor in Residence in the College; and, until 2015, usually lectured in the Foundation Year Programme and often co-ordinated Sections.

In 1982, I moved from my post in the Foundation Year Programme at King’s to the Department of Classics, was promoted to Associate Professor and tenured in a Carnegie Chair, becoming full Professor at Dalhousie in 1996. In July 2015, I was retired from King’s and given a post-retirement Professorship of Classics at Dalhousie. Since 1997, I have been Secretary and Editor of Dionysius. I served as Chairman of the Department of Classics for seven years and have been responsible for the establishment of the Programme in Religious Studies within Classics and have encouraged its teaching of Arabic. In 2007, I was Masterminds Lecturer at Dalhousie.

I have published three monographs and have another in press, have edited nine volumes and sixteen issues of Dionysius. At present (2015) I am committed to write a monograph on Christian Neoplatonisms. My first monograph came out of my Oxford D.Phil. and treated the Neoplatonic sources and structure of the doctrine of God in Thomas Aquinas. Published by Oxford University Press in 1987 it was republished in 2000 in the series “Oxford Scholarly Classics”, the millennial project of Oxford University Press guaranteeing that it is a permanent publication. In the last decade I have published: One Hundred Years of Neoplatonism in France: A Brief Philosophical History (Peeters, 2006) and Aquinas’ Neoplatonism in the Summa Theologiae on God. A Short Introduction, in press; Deconstructing Radical Orthodoxy: Postmodern Theology, Rhetoric and Truth, edited with Douglas Hedley (Ashgate Press, 2005), Perspectives sur le néoplatonisme, édité avec Martin Achard et Jean-Marc Narbonne (Les Presses de l’Université Laval, 2009), and Changing our Mind on Secularization. The Contemporary Debate about Secular and Sacred in Judaism, Christianity and Islam, edited with Nicholas Hatt (St Peter Publications, 2010). I have published more than one hundred and twenty academic articles and reviews, of which the latest is “Conversion: Ontological & Secular from Plato to Tom Jones”, Numero Cinq, V: 7, July 2014: http://numerocinqmagazine.com/2014/07/15/conversion-ontological-secular-from-plato-to-tom-jones-essay-wayne-j-hankey/

I have delivered more than eighty major invited scholarly lectures and addresses in Canada, the USA, and Europe, and have produced hundreds of journalistic, theological, and devotional publications and addresses of which the last were “This place is awesome. This is nothing other than God’s House. This is Heaven’s Gate” (Genesis 28:17), Sermon for an Evensong in Thanksgiving for the Restoration of St Anne’s Birch Chapel, Smith’s Cove. August 9th, the 10th Sunday after Trinity. [link]

and “The Spirit of God was Borne upon the Waters” (Genesis 1.2), Quiet Day for the Ordination as Deacon in the Church of God of Nicholas Hatt October 24, 2015, King’s College Chapel.

In June of 2017 the Dalhousie Department of Classics will host a retirement Colloquium for me entitled “Wisdom belongs to God”. The title is from Plato’s Apology 23a: ?? ???? ? ???? ????? ????? and refers to one of the principal continuing themes of my scholarship, teaching, and publications: the self-criticism of reason within the Hellenic tradition.

I have observed that Hellenism is not so much characterized by critical or sophistic ratiocination as by the self-reflexive criticism of this. In my teaching I have tried to show how Hellenic self-criticism of reason has a beginning with Homer’s treatment of the destructive endlessness of Odysseus’ conniving and curiosity, achieves tragic depth in the  “????? ?? ?????“ chorus of Sophocles’ Antigone, founds Platonic and Aristotelian philosophy in its battle against sophistry, and rises in philosophical theology to the divine thinking as truth and being. My studies of the Platonic, Neoplatonic and Peripatetic traditions, especially as they are absorbed into the Pagan, Jewish, Christian, and Islamic religious media, also expose the self-overcoming of finite rationality.

Given the wide range of forms of this self-criticism, we hope that a great number of my former students working in many fields will participate. Dr Peter O’Brien has agreed to chair the organising committee.

I am building up the Wayne John Eisenhauer-Hankey Endowment to support the continuation of the study of ancient, Patristic and Medieval philosophy in the Classics Department. Contributions may be made at https://alumniapps.dal.ca/giving/giving.php?gift=classicsdept

At present my research is mainly related to my teaching, lecturing and publishing commitments. I am working on Christian Neoplatonism, attempting to write an overview, on the Summa theologiae of Aquinas, the De Anima of Aristotle, and the Confessions of Augustine, on Philo Judaeus and on his much underrated influence, on the origins and conceptual structure of conversion and incarnation in Platonic philosophy and Christianity, on Plotinus, Iamblichus and Proclus and their influence, especially on their understanding of matter, evil and providence, on Eriugena, Anselm, and Aquinas, and on the heirs of Albertus Magnus along the Rhine, especially Eckhart and Cusa. My teaching of Eriugena has taken me back to contemporary French philosophy, especially to Jean Trouillard. Invited lectures and teaching on Aquinas have brought out the relation between his positions and his evolving knowledge of the history of philosophy, on the dynamic of giving and receiving which structures esse for him, and on the incarnational character of his theological metaphysics. Particular present concerns are the treatment of philosophy in current Christian theology, the theological and philosophical origins of our relation to nature, mysticism, and the formation of the Western self, and the diverse literary, artistic, architectural and musical forms of Christian Neoplatonism. My planned teaching for 2016-17 will take me back to work on Proclus, Boethius and Anselm.