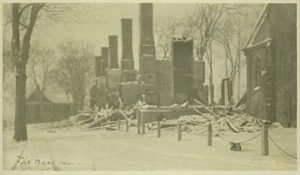 On Feb. 5 we mark the 100th anniversary of the fire that destroyed the main building on the original King’s campus in Windsor, Nova Scotia and set the stage for our relocation to Halifax in 1929. To remember this event in our College’s history, that in many respects made us who we are, the King’s community is invited to join President Lahey, Her Worship Anna Allen, Mayor of Windsor, and our Librarian and Archivist, Janet Hathaway, in the Wardroom 4–5 p.m. for a wine and cheese reception.

For this ‘Remembrance Hour,’ Janet will be sharing images from the fire that have never been previously presented to the community. They are from a photograph album compiled by Ingham Wright Palmer, a King’s student in 1919-1920 and given to King’s by his daughter, Mrs. Aleah Palmer Lomas BA’48 of Sherbrooke, Guysborough County, in 1991. There will be a short reading and the hour will conclude with the ringing of the Chapel Bell, followed by Evensong in the Chapel for those who wish to go.