In addition to loving words and books here at King’s we also love to perform. King’s students have many opportunities to explore their artistic interests through our active theatre, choral and dance groups.

It’s one of the oldest theatrical societies in North America and is also the largest per capita campus society of its kind on the continent.

Each year, based on what’s pitched by local and student artists, the KTS puts up commercial plays, musicals, original student-written works and experimental pieces.

The King’s Chorus has more than 80 participants from within the community including students, faculty and alumni, dedicated to making joyful music together. They learn and rehearse major choral works from various traditions and give a concert each semester.

The King’s Chorus is committed to fostering a supportive environment where singers of all levels can improve their musicality and enjoy themselves in the process. They sing challenging and beautiful music, but make sure to have fun while doing it.

King’s Chapel Choir amazes and delights through weekly Evensongs and Eucharists in the King’s College Chapel as well as at other major services throughout the academic year and at an acclaimed concert season at the Cathedral of All Saints in Halifax.

The choir comprises 24 choristers from the King’s College and Dalhousie University communities, many of whom are students receiving choral or organ scholarships. The choir also tours throughout the province and records.

The King’s Dance Collective (KDC) aims to provide a non-competitive outlet for students interested in all aspects of dance and choreography.

The above are but four of our largest artistic groups. You can find a full list of student societies that are brimming with award-winning creative outlets for you at King’s. And if you don’t see one that interests you, feel free to suggest creating one that will. Also, don’t forget to check out the Laundry Room Gallery to enjoy the visual arts.

Bring it with you when come to King’s! In addition to its regular parade of guest musicians, the HMCS King’s Wardroom and chapel have open mic nights, poetry readings and other performances. There’s also a piano in the Wardroom that anyone is free to play. Within reason and reasonable hours, residence life welcomes live music, too.

Degrees in Music and Theatre

And if this is the stuff that you thrive on, did you know you can also pursue a music or theatre degree at King’s through our partnership with Dalhousie?

Many of our alumni have gone on to have great careers in the arts. Visit King’s Community and check out profiles in music and theatre.

"It (the KTS) has a very professional vibe to it. The work that we produce is high quality because we have such a team of dedicated individuals working together." 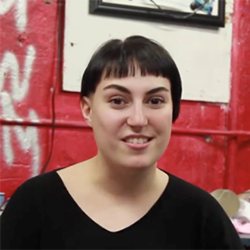