The Pit is really just a Petri dish for experimentation.

Griffin McInnes is an award-winning playwright and theatre director. Not bad for a guy who hadn’t considered that as a career path before going to university.

“I was never a drama kid,” Griffin says. “I didn’t do drama in high school. It didn’t click for me until I got to King’s and into the King’s Theatrical Society (KTS).”

Once he got there, in his first year, he jumped head first into The Pit, King’s black-box theatre that Griffin says, “is really just a Petri dish for experimentation”. First order of business – write a play.

“It was an over the top farce,” Griffin explains. “I convinced the KTS to put it on. It got a few laughs and that was it.”

By “that was it” Griffin means, as Julius Caesar said, the die was cast.

Griffin took theatre classes through Dalhousie and continued to work with the KTS as an actor, director and playwright. But he was also deeply ensconced in his Contemporary Studies Program. He discovered the work of Bruno Latour, a French anthropologist, sociologist and philosopher. Latour would play a big part in Act Two of Griffin’s education, but there is more to Act One.

So, bitten by the theatre bug was Griffin that when the KTS was dormant for the summer he and Liz Johnston, BA(Hons)’11 started Wits End Theatre Company.

“We wanted to make something that was fun. We wanted a theatre company that really valued comedy as a real art form unto itself.”

Griffin stayed with Wits End after graduating from King’s and for the next couple of years worked the Halifax theatre scene. But, he says, “I was craving more education and training.”

Act Two opens with Griffin heading off to France to do his Masters at the Paris institute for Political Studies, Sciences Po. Bruno Latour was teaching there. That’s why Griffin went there instead of studying theatre elsewhere.

“I knew I could get the technical training as a theatre director on the job. But to be an artist and to have anything worth saying I wanted to go and do something different. If all you are doing as an artist is spending time with other artists and thinking about the technical parts of that art there isn’t the exposure to other ideas to make art out of. I wanted to exercise the part of brain that wasn’t just about theatre.”

Act Three has Griffin working as Associate Artistic Director at Outside the March theatre in Toronto, a company started by King’s alumni Simon Bloom, BA(Hons)’10 and Mitchell Cushman, BA(Hons)’08. While he thanks King’s for that, and the KTS, he is also thankful for the training in critical thinking that was so much a part of his undergrad studies.

“That is what is amazing about King’s. You learn how to deconstruct texts and as a theatre director that’s what we do. But in theatre we are also reconstructing. We are not just tearing something down. That’s what all good art does. That’s very Latourian.”

Act Four is still to come. 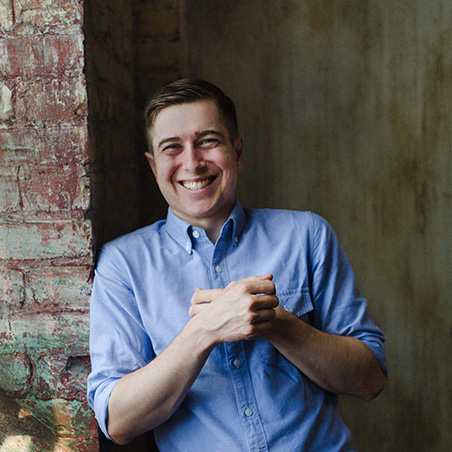