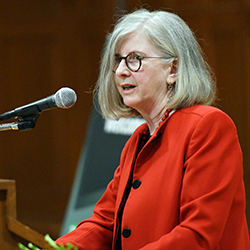 The following remarks were delivered at the 2017 Alumni Annual Dinner on May 27, 2017 by Vice President Kim Kierans, BA(Hons)’83, about her former colleague, Kevin Gibson, BA(Hons)’93.

We’re here tonight because we share a love and respect for King’s College – for its values, traditions, and an uncompromising belief in the questioning mind. There is one man here tonight who has taken that and lives by it. It’s our Kevin Gibson.

Kevin is a proud alumnus. He graduated with a BA in Classics in 1992. He stayed on for another year to do an honours conversion before heading to Oxford to study jurisprudence and then on to Queen’s where he graduated with a law degree.

He returned to Halifax to practice law at McInnes Cooper and, in 2006, he answered the call to serve King’s.

Kevin took on what many would consider one of the most thankless volunteer positions : Secretary to the Board of Governors.

For 10 years (2006-16) Kevin documented in detail the meetings of the Board and Executive.  His sage legal advice helped the Board navigate big issues, and he was instrumental in the creation of our governance documents. As Secretary, he served on various Board committees including Governance, HR, and Nominating Committee.

King’s is in Kevin’s marrow.  His love for the institution knows no bounds.  I know. He took my phone calls Saturdays, Sundays, and many an evening.  Thank you, Carolyn, for your patience.

Even as his family grew, and the demands of his law practice increased, he still made time for King’s. Thank you, McInnes Cooper. And I want to welcome his colleagues who have joined us in this great evening.

Kevin has also consistently been a big supporter of the Chapel Choir, both as a benefactor and regularly attends the concerts.

But above and beyond his service, Kevin is also an outstanding ambassador for the wider King’s community.

It has been an honour as Vice-President to have worked with, and learned from, you, Kevin. You embody the spirit of King’s. You have worked diligently to make our university a better place, and to make it better known outside the quad.

I am so very pleased to declare you, Kevin Gibson, as a most worthy Ancient Commoner.