100 years after the fire, King’s community gathers to remember

100 years after the fire, King’s community gathers to remember King’s recently marked the 100th anniversary of a fire that destroyed the main building on the original King’s campus in Windsor, N.S., on Feb. 5, 1920. To commemorate this historic day, King’s held a reception in the Wardroom that included never-before-shared photos, a reading and a ringing of the Chapel’s bell.

It’s believed the steward’s children were playing with matches and accidentally started the 1920 fire at around 2:30 p.m. After catching the wallpaper, the flames would have crawled upwards. “Once fire reached the tar roof, it was game over,” said King’s Librarian and Archivist Janet Hathaway, speaking at the reception.

An unfortunate series of events unfolded over the next four hours. Though students quickly took action to couple the hose together, cold weather had frozen the hydrants and rendered them useless. Although people were evacuated and some belongings were salvaged, the fire quickly claimed students’ rooms in the bay residences. By 3:30 p.m., the roof of Radical Bay had fallen in and by 4 p.m., the centre of the roof had collapsed. By 5 p.m., the main building was totally destroyed. “It was an incalculable loss,” said Hathaway. Six massive brick chimneys belching forward smoke were all that remained. 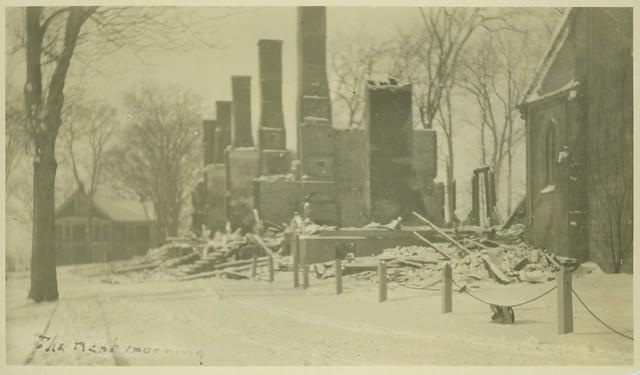 Ingham Wright Palmer, one of about 40 students enrolled at King’s in 1919-20, took pictures as King’s burned. He didn’t share them publicly but did pass them on to his daughter, Aleah Palmer Lomas, BA’48, who donated them to the university in 1991. They were enlarged and displayed on easels at the reception.

“HISTORIC MAIN BUILDING OF OLD KING’S BURNED…THE OLDEST UNIVERSITY IN THE DOMINION, AND ONE OF THE MOST FAMOUS ON THE CONTINENT, LIES IN RUINS…ALL THE STUDENTS ESCAPED, AND SOME OF THE FURNISHINGS WERE SAVED,” read an account in a Halifax newspaper the next day. After the Feb. 5, 1920 fire, Carnegie Corporation of New York offered to assist financially with a rebuild if King’s agreed to form an association with Dalhousie University which set King’s on its new course in Halifax. On Sept. 1, 1920, King’s and Dalhousie signed Articles of Association and King’s began its transition to Halifax, after which, King’s students began attending classes in Halifax. In 1926, a campaign was launched to raise funds to build a permanent campus in Halifax. In 1928, King’s retained Halifax architect Andrew R. Cobb to design the new campus in its present location near the northwest corner of the Dalhousie campus and in 1929, the University of King’s College campus in Halifax officially opened.

Windsor’s Mayor, Anna Allen, and Deputy Mayor Laurie Murley attended the reception to commemorate the 1920 fire and the historic relationship between King’s and Windsor. They presented King’s President Bill Lahey with a plaque. It reads, “Out of the ashes, on February 5, 1920, the University of King’s College would rebuild…May the University of King’s College continue to prosper and provide academic innovation and excellence.”

President Lahey also spoke of the historic relationship between King’s and Windsor at the reception and the resilience each has showed in the wake of the fire. King’s Vice-President Dr. Peter O’Brien shared a reading from F.W. Vroom on the occasion of the fire.

“The influence of our Windsor history on our present and future will continue, no matter how many years separate us from the university’s founding and life in Windsor,” he said. ” For Windsor, the fire meant the loss of a university it had nurtured for more than 130 years (since its founding in 1789). But it also meant the emergence of the university’s school, now King’s Edgehill, from the shadow of the university to become the thriving school it is today.” King’s showed its resilience by ” re-establishing itself here in Halifax, on terms that were true to its history and identity as a college in the Oxbridge tradition but that also embraced its new identity as part of the large university that Dalhousie was to become.

King’s Vice President Peter O’Brien read a passage from F.W. Vroom’s book as the reception wound down, finishing with: ” The College Bell, which hung under the portico and had run to summon students to chapel, to lectures and to meals for over one hundred years, sounded it’s last note when it fell from the flames to the ground below.”

King’s Chapel rang its bell at 5 p.m. to mark the hour at which the bell fell from the portico of the original King’s. All the reception guests were then invited to attend Evensong, which was sung that evening in honour of the anniversary.