After reporting from all over the world, veteran journalist and alumnus David McGuffin brings his talents back to King’s and Canada

After reporting from all over the world, veteran journalist and alumnus David McGuffin brings his talents back to King’s and Canada

Alumnus David McGuffin, BJ’95, returned to King’s on Feb. 26 to talk about his 25-year career as a foreign correspondent and supervising editor at National Public Radio (NPR) in Washington, D.C.

“As a journalist, your best bet is to follow what’s interesting to you,” he told King’s journalism students. 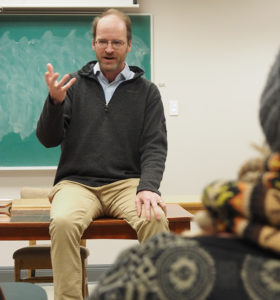 McGuffin’s career has taken him all over the world. He was CBC’s Africa correspondent, reporting from conflict zones in Somalia, Sudan, Democratic Republic of Congo, Northern Mali and Afghanistan. He covered the Vatican and European affairs for NBC and ABC, including the lead-up to the Iraq War and the last months of Pope John Paul II’s papacy. He reported from across China and into North Korea as CTV’s Beijing Bureau chief. He also covered the war in Chechnya and Russia’s 1998 economic collapse as bureau chief in Moscow.

Growing up in Ottawa the son of a Toronto Star reporter, McGuffin’s early role models for an international reporting career included his friends’ parents who were diplomats and foreign correspondents like the CBC’s Matthew Halton and Joe Schlesinger. He came to King’s because the one-year Bachelor of Journalism degree gave him the hands-on training he was seeking so he could tell the kind of stories he wanted. Michael Cobden, King’s Director of the Journalism School when McGuffin was a student here (1994-95), gave him sage advice when he learned McGuffin wanted to be a foreign correspondent: “He told me just go do that.” The days of getting hired and sent some place were over so just figure out where you want to go and go there, Cobden told McGuffin. He did, and it’s always worked out.

It’s amazing what journalism can do, and what happens when it’s not there.

After two years at the MacNeil/Lehrer Newshour in Washington, D.C., he landed his first foreign reporting job in Russia where he reported on the end of Boris Yeltsin’s reign. He described the theme of stories out of Moscow at the time as stories of decline and collapse—and then came Putin-ism. “I had a prescient moment reporting on his first election victory writing, ‘Russians say they want an iron fist and it looks like they’re going to get that in Putin,’ ” McGuffin says.

He next moved to China where the theme of stories out of Beijing were more in the vein of ‘this is our moment.’ China was more welcoming to Western journalists then, and some in the Chinese tech sector told McGuffin that the internet was going to be their great democratizer. “That was before the Great Firewall of China (through which the state tightly regulates and controls internet access),” he says. Experiments in grassroots journalism and democracy ground to a halt.

From China he moved to Rome where he witnessed Pope John Paul’s final days as Pope. He told King’s journalism students that Pope John Paul was so frail due to Parkinson’s disease he could barely speak and used a wheelchair until the Iraq War broke out, at which time the Pope literally rediscovered his voice as he led the effort to prevent the conflict. “Witnessing the revival of this man was a great privilege,” he says.

McGuffin advised the journalism students gathered to forge their own journalism careers not only by following their interests, but by making face-to-face connections. He says connections reverberate throughout a career, and it was his regular in-person check-ins with the CBC that led to his eventually working for the public broadcaster.

During his talk, McGuffin also referenced the Hawthorne Effect, a theory which says the act of being observed changes behaviour. Kenya, he believes, avoided a civil war because of the reporting happening there whereas Rwanda, he says, suffered a genocide that went almost un-reported (many of Africa’s foreign correspondents at the time were reporting on Nelson Mandela’s return to power in South Africa).

“It’s amazing what journalism can do, and what happens when it’s not there,” he says.

McGuffin’s also had lighter assignments, including reporting from the World Cup in Cape Town, South Africa, where he filed multiple stories on vuvuzelas—the popular noise-making horns. 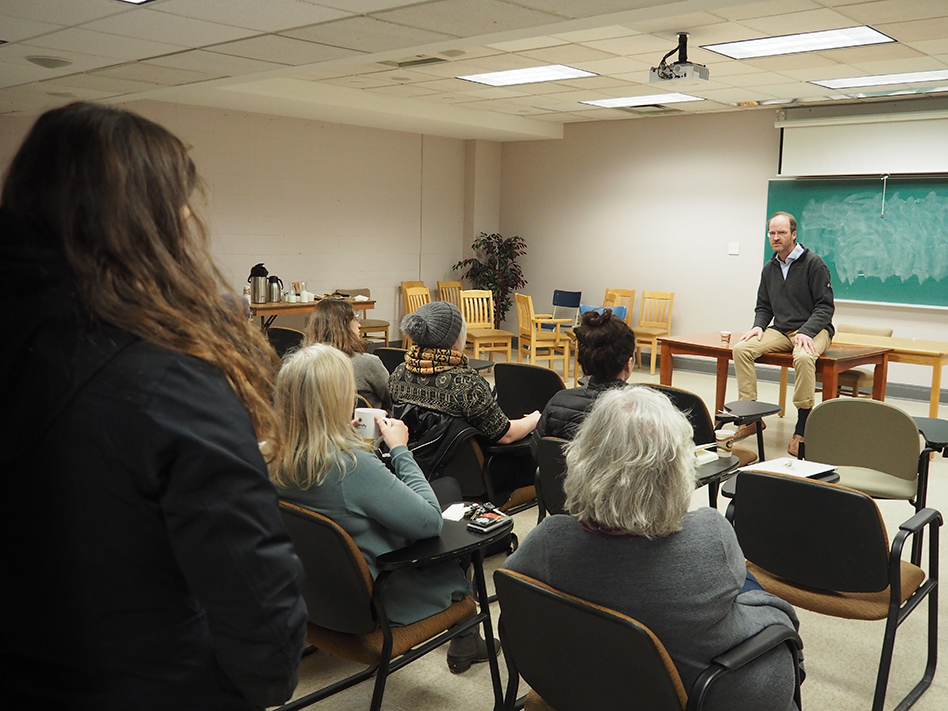 “As a journalist, your best bet is to follow what’s interesting to you.” McGuffin’s journalism career has taken him to Somalia, Rwanda, China, Russia, the Vatican and Washington, D.C., among other places.

He says that after a period of downsizing that’s seen the closure of as many as 200 newspapers in the past 25 years, he’s optimistic about the state of journalism in Canada today. He says the paywall system seems to be now bringing in necessary revenue to the industry and he’s encouraged by the rumours that the next federal budget will include support for journalism, so long as it isn’t just handouts to failing news organizations, but rather tax and other incentives to innovate and invest in reporting. “In Canada, we need to find new ways to make journalism work.” In the U.S., he cites the example of NPR News, which is funded almost entirely by tax deductible donations from listeners, foundations and corporations, and now has dozens of bureaus both across the U.S. and overseas. He also finds it heartening to see some newspapers acting more robustly than they have in years, like the Washington Post, which at one point had  assigned 30 reporters and researchers to the Russian interference scandal, as a sign that re-investment into journalism that holds power to account is again being prioritized.

McGuffin recently moved back to his hometown, Ottawa, leaving his full-time job with NPR’s flagship news and current affairs program, Morning Edition, in Washington, D.C., where he says he’d spent most of his time recently adjusting news line-ups to react to what President Donald Trump had just tweeted about and the daily onslaught of breaking news about the administration. He’ll continue to freelance with the NPR and he’s about to launch a new podcast he’s created with Canadian Geographic called “Explore” in which he’ll interview and profile explorers.