Rev. Canon Russell Elliott has just written a new book of stories about New Ross, N.S. and its pioneer values

The further removed Rev. Canon Russell Elliott, BA’37, Div’52, DD’79, becomes from his time as a student at King’s, the more he cherishes it. Now 101, King’s holds a special place in his heart. “It’s meant more to me as the years went by than when I was actually there,” he admits. “I enjoyed life at [King’s] very much, [I] took part in things while they were going on, and missed it very much when I left. At the same time, the whole point of going to college is to get out of college!”

It was 1937 when Rev. Elliott got out of college. Some of his classmates were shipping off to fight in the Second World War. King’s was different, too. “More like a high school,” the reverend says. King’s is a tight-knit community now, but Elliott says it seemed even closer back then—and he recalls the past as if it were yesterday. He revisits the night he first registered to study at King’s more than eight decades ago: “This young fellow came over to me and asked, ‘Are you Russell Elliott?’ I said yes, and he said, ‘I’m Mel French. I’m your roommate.’ ” The two became friends for life. “That was the way King’s was.” 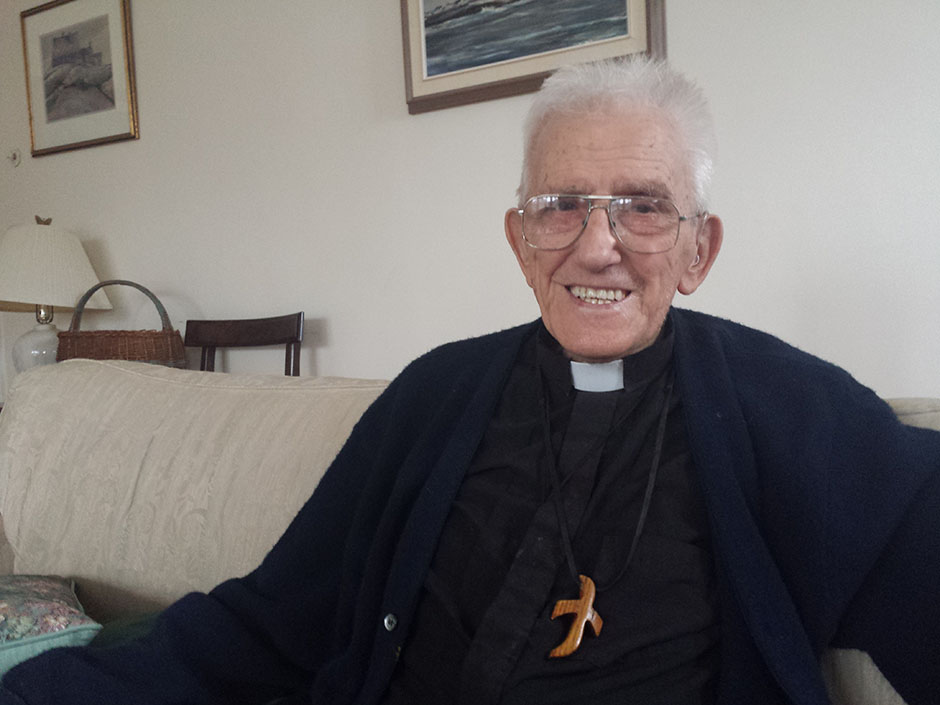 The Rev. Canon Russell Elliott first graduated from King’s 82 years ago, and at age 101 has fond memories of his alma mater.

Elliott returned to study at King’s in the 1950s, and says the school and its professors made a lasting impression on him. “As time goes on, I’m beginning to see the values that existed there. I tried to develop them in my own life.”

Proper values are something the reverend has spent a long lifetime seeking out. He’s from New Ross, N.S., a small pioneer village founded in 1816 by disbanded soldiers who fought in Canada’s War of 1812. Born a year after New Ross marked its 100th anniversary, he was a central character in its 200th anniversary celebrations. For Elliott, his hometown remains a symbol of a proper way of life, something he says is harder to find today.

Glimpses into Old New Ross is a collection of short stories Elliott just finished writing. “You can get as modern as you like, but you can’t replace pioneer values,” he insists. “How neighbours looked after each other, how neighbours argued among themselves, but at the [same] time they were always like one big family.” Elliott says if someone in the neighbourhood fell ill, everyone else stepped up to help the family out.

At 101 years old, Elliott feels he still has things to do and is happy he can still do them. He jokes that at his age, though, everyone wants to take care of him. “I was 98, 99, and they went ‘oh, that’s interesting,’ ” laughs Elliott, who still lives on his own. “But once I was 100, they all just wanted to take care of me.”

What has always motivated him is being useful. He rejects the idea of retirement and believes there are too many bored people walking around.
“Everybody should be creative. Everybody should be producing something,” Elliott asserts. “If you’re going to have a happy and healthy life, have purpose.”