Matriculation, a ceremony in which incoming students are formally welcomed as members of the University of King’s College, was celebrated on campus this week.

“Welcome to the ancient and solemn ceremony of matriculation, which marks your formal entry into the College as student members,” said King’s Vice President Dr. Peter O’Brien, who also serves as Public Orator.

The matriculation ceremony, a form of which has been celebrated for two-and-a-quarter centuries at King’s and for many centuries longer at the great universities of England and Scotland, is named for the matricula—a large register that records every King’s student’s name.

Dressed in the college’s traditional academic gowns, the students proceeded in groups into the library where they recited an oath in Latin, expressing their desire to enter the College and their willingness to observe its traditions.

“We use Latin, the universal language of learning in the West since Antiquity, to remind ourselves that the community of scholarship we enter is larger than our own circle of friends, our College and our nation,” explained Dr. O’Brien, adding that Latin connects students to the minds and spirits of generations past. He credited Cicero and Demosthenes, master communicators in Latin and Greek whose busts flanked the matricula as providing inspiration, and mentioned the winged Victory of Samothrace whose statue is poised above the room. “She serves as an apt reminder of the nameless voices and forgotten voices that fill our tradition, waiting to be rediscovered. She also represents voices yet unknown, trained in our tradition of collegial learning, and waiting to be heard in the future.” 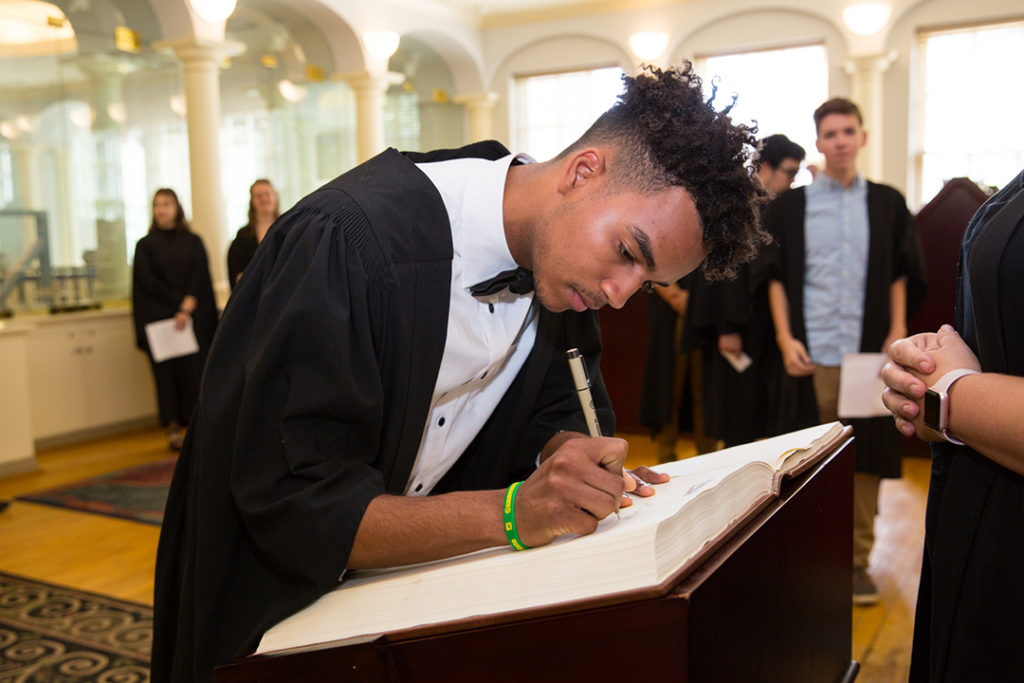 After the oath, the students signed the matricula, symbolically joining the community of thousands of King’s men and women who came before them.

“Know that you have been today entered in the Register of the College, and are bound to observe all the statutes contained in this book, as far as they concern you,” Dr. O’Brien told the students as they finished signing.

In his closing remarks, President William Lahey emphasized the oath’s message of serving the precepts of communal life and of learning, remaining sensitive to the needs of others, and lifelong commitment to King’s.