Abagail Bumpus, a fourth-year History of Science and Technology (HOST) student and her partner, Guy Knapp, built a very hungry caterpillar automaton as their final project for the History of Automata seminar (HSTC 3011). 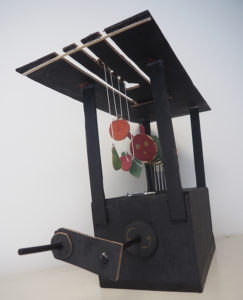 Using cams (i.e. wheels with patterns cut into the edge) and cam followers (i.e. mechanisms to track the movement along the edge of the cam) the caterpillar makes undulating “inching” motions. This up-and-down motion of the caterpillar is driven by a crank that advances cardboard fruit to the caterpillar’s mouth where it falls and is ‘eaten.’

“We decided to make a caterpillar and design it to look like Eric Carle’s The Very Hungry Caterpillar,” says Abagail. “There is something wonderful, mysterious and joyous about watching the caterpillar from your childhood memories come to life. You get this sense of wonder when you watch videos of automatons but it is remarkable how even this rudimentary automation can invoke wonder.”

The seminar course was paired with a lecture series at King’s this semester called Automatons! From Ovid to AI. It featured nine lectures delivered by world thinkers reaching across programs and interests at King’s. Dr. Gordon McOuat taught the seminar and organized the lecture series. “We were engaging a very timely topic: the life of machines and the nature of artificiality speaks to our modern predicament, our traditions, our lives and our futures,” Gordon says. “Moreover, the lecture series reached beyond King’s into the wider community, showcasing the kinds of work we are doing here, drawing the wider community into conversations with King’s.” Dalhousie and Saint Mary’s University, and the Social and Sciences and Humanities Research Council of Canada co-sponsored portions of the series.

The public events and lecturers spoke to each other across disciplines and intellectual interests. They touched on science fiction, musical performance, algorithms of artificial intelligence, animated matter, war and ethics, cultural appropriations of robots, the relationship of the mind to the body and other key questions. 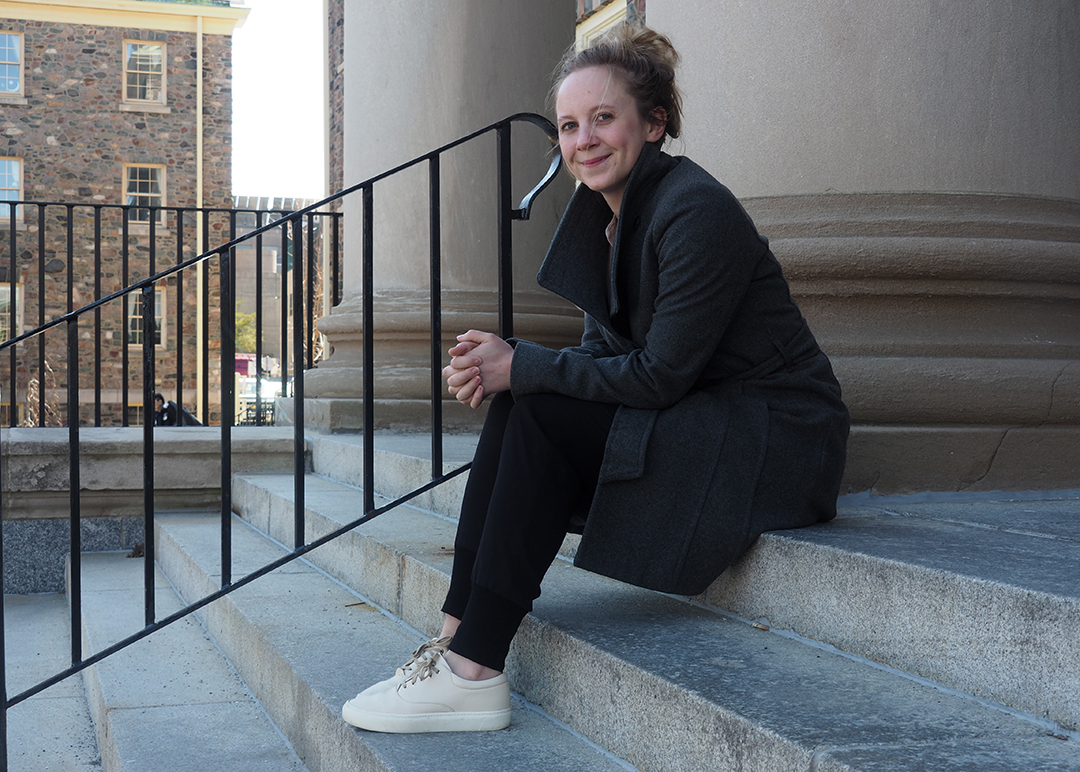 Stephanie Dick, BA(Hons)’07, now a professor at the University of Pennsylvania in the Department of History and Sociology of Science, returned to King’s to deliver the final Automatons lecture on “Making up minds: thinking with, about and for humans.” Her talk focused on who programs computers and what biases accompany them, and ultimately asked, “How much of what we do can and should be automated?”

“The premise of the lecture was that AI used to be all about us,” says Stephanie. “Can we get computers to think like us? It’s ceased to be about us in that way.” Today, Stephanie explains, we want computers to do things we can’t do, like build deep neural networks and analyze big data. She says the thinking has switched from ‘How do machines think?’ to, ‘How do we think differently because of machines?’

Stephanie is a scholar in the history of computing. She’s also a Harvard graduate and part of the prestigious Harvard Society of Fellows. She says she came to King’s planning to stay just for FYP, but was turned on to HOST and the interdisciplinary nature of the programs here, and has remained a close friend of King’s since graduating.

The series started with a public live musical performance and screening of Fritz Lang’s film, Metropolis. Dr. Courtney Roby from Cornell University lectured on the notion of “wonder” in ancient automatons and how we should resurrect that notion as a caution against the instrumentalization of automatons. In her lecture, Dr. Teresa Heffernan cautioned against reading science fiction as a prescription of the future rather than a critique of the present. Dr. Heffernan, director of a SSHRC-sponsored project on “Social Robot Futures,” also debated with Dr. Stan Matwin, Dalhousie’s Canada Research Chair working in A.I. Dr. Despina Kakoudaki’s lecture honoured the 200th anniversary of Frankenstein by looking at the cinematic and cultural work of artificial people.

Dr. Dawn Brandes of Halifax Humanities spoke on Imagined Puppet Life, and Dr. Simon Kow, chair of Early Modern Studies at King’s, lectured on Asian Robots and Orientalism. “Those two really complemented each other,” says Gordon, “showing the diverse ways in which animated objects can be brought to life in different cultures.”

A public debate between Noel Sharky and Duncan MacIntosh drew a capacity crowd when the two intellectual titans clashed over the future of warfare. CBC’s flagship news program The National carried highlights.

Dr. Stephanie Dick, BA(Hons)’07, (SEE SIDEBAR), the final speaker, wrapped it up by returning to the place of the human in all of this.

“The automaton lectures this year were a blast and a great conclusion to my HOST degree,” says Abagail. 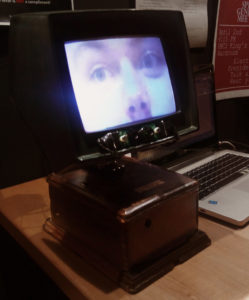 Like Abagail, Andrew Milne was also a student in the History of Automata seminar. He created something called FaceBot001 for his final project. It operated through three states: search mode, facial acquisition mode and chatbot mode. In search mode, the robot randomly looked around the space reciting selected lines from Dante’s long narrative poem The Divine Comedy that related to mechanisms until it detected a face. It then switched to facial acquisition mode, randomly selected a gender (voice) and asked if it could become you and have your face. Finally, it switched to chatbot mode in which anyone could chat with the robot using a small keyboard.

“I had intended to make a basic robot: something with loosely anthropomorphic mechanical construction, that performed a set function. However, as I worked through the various problems that arose there was a sense of it wanting to be a certain way, or rather, that I could only complete the project if I aligned my efforts with a certain organization that seemed emergent from within the set of functions that I had begun to assemble,” Andrew says. “It was like feeling drawn toward creating coherence. Not so much a predetermined position but rather an unfolding determination that I was following.”

Gordon says the lecture series exceeded his expectations, and the students in the affiliated course worked hard. “I was also impressed by the wide array of projects done by the students in the class, from the creative automaton models of Abagail and Andrew, the self-learning video games, through the short stories, magazines and videos.”