He already has a university degree. He already has a job in news media. But Julian Abraham wants to be a great journalist and he says King’s is helping him achieve that.

He’s already working in a newsroom, but Julian Abraham aspires to continually improve—and he wants to do more. So, he decided to enroll in King’s renowned one-year bachelor of journalism program.

“I’ve talked to alumni who are successful in the field and they actually say this is what changed the path of their career,” Abraham said. “Since starting, I’ve advanced much more than I have in the last, you know, five years that I’d been working.”

Currently working behind the scenes at CTV News Atlantic, Abraham has his sights set on the editorial side of journalism. “I’ve heard this is the best place to learn editorial skills,” he said.

“I’ve talked to alumni who are successful in the field and they actually say [King’s] is what changed the path of their career.” – Julian Abraham

In 2016, he graduated from Saint Mary’s University in sociology and criminology. Before officially starting the graduate, one-year bachelor of journalism program this year, Abraham took some King’s journalism courses last year. He studied the work of successful journalists, laws regulating media and the internet, and documentary filmmaking.

It was exactly what Abraham wanted. “I like getting in-depth [learning and] great writing, rather than just who, what when, where,” he said. “To really get in and learn the ethics of it and learn the stylistic stuff that’s going to set you above the rest.”

About the Bachelor of Journalism program

Julian's work on the signal

King’s reshaped Abraham’s goals and offered him career focus. “Before I started at King’s, I was hoping to just do anything journalism related, but now I’m really interested in the writing,” he said.

The introduction has already made a noticeable difference, according to Abraham. “Seven thousand percent,” he said. He has a better understanding of what it takes to write at a high level. He notices the nuances of great writing like sentence structure, paying attention to things like the best words with which to start and end sentences. He understands how to convey his points effectively and powerfully.

Halifax has great things for a lot of people, but especially students. I mean this neighbourhood and this area by the water…what more could you want? 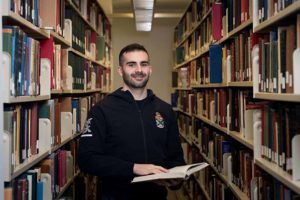 Julian Abraham came to King’s to pursue a one-year Bachelor of Journalism and advance the skills he’s gained while working behind the scenes at CTV News Atlantic.

Outside of the classroom, Abraham couldn’t be more satisfied with the King’s experience. The mature student appreciates the sense of community. “I mean I felt weird going back to university because I’m a bit older, and no…[I] fit right in,” he said. “Just so many like-minded people, so many interesting and fun people.”

“I was also surprised by just how much you can do on campus. You know there’s a gym, there’s a café, there’s a bar, what more do you need?”

There’s also a library. It’s been an important resource for research, but also a source for friendship. It’s where Abraham met Janet Hathaway, the university’s librarian and archivist.

“I had heard from pretty much every professor and their dog that she is the best for research,” Abraham said. There’s a lot of research involved in journalism and it could be daunting, according to Abraham. He received a lot of help from Hathaway, though. “She’s like a wizard when it comes to the library and the library’s website.”

The librarian took the student under her wing. No matter what the request was, Hathaway accepted Abraham’s challenge. “I’ve come to her with some really weird topics for opinion writing, and she was already up-to-speed. [She’s] knowledgeable,” he said. “Yeah. Love Janet.”