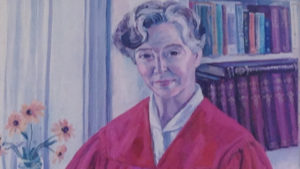 Trent University’s Traill College has renamed Principal’s Lodge “Fry Lodge” after its first principal, Dr. Marion Fry (BA ’53, DCL ’85), who served in the role for five years starting in 1963. Fry taught philosophy at Trent until 1986, and held the position of vice-president from 1975 until 1979, with several stints as acting president during her career at the University.

Michael Eamon, Traill College’s current president, called Fry “a groundbreaker as a woman in higher education and an inspiration for young women at a time when universities were male-dominated.”

Following her years at Trent, Dr. Fry served as King’s 20th President (1987-1993). She taught Philosophy during her tenure, and remains one of our cherished Inglis professors.

Congratulations, Dr. Fry. King’s is delighted to see you receive this honour, and is grateful to be among the institutions to benefit from your strong leadership.