Want to take your understanding of history’s biggest ideas to the next level? Discuss them in community, says Ata Zargarpour.

When 21-year-old King’s student Ata Zargarpour read Descartes over the winter break last year while a Foundation Year Program (FYP) student, he knew he was in for a challenge. 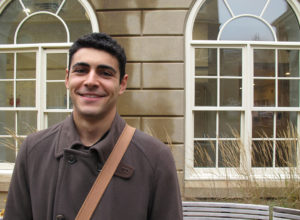 King’s student Ata Zargarpour was commended as the top student in the Foundation Year Program.

His efforts paid off, because Zargarpour has received the Dr. Kathleen Margaret (Peggy) Heller Memorial Foundation Year Prize for achieving the highest marks in FYP. The $1,000 prize was established in memory of Professor Heller who died in 2011.

Zargarpour also had the opportunity to meet Michael Heller, Dr. Heller’s widower, at a formal meal.

“It was a really beautiful experience, to sit with him and ask him about his story,” says Zargarpour. “I really appreciated that part of it.”

Originally from Vancouver, Zargarpour has strong roots in the Bahá’í religion. His parents were Bahá’í refugees from Iran who fled persecution in 1979 and came to Canada.

After graduating from high school, Zargarpour took two years off. He spent those two years volunteering with different initiatives, first in South Africa and then back in his hometown of Vancouver, and while the experience was valuable, Zargarpour still struggled with the question of what to do next.

“There was such a contrast between what I wanted to do—who I wanted to be—and the reality, and I didn’t know how to bridge that gap.”

A suggestion from a school counsellor and a visit to King’s convinced Zargarpour that FYP was right for him.

Zargarpour says he was gratified but surprised to hear he had received the award for highest marks in FYP, primarily because his studies were interrupted during second semester, when he flew home to deal with a family emergency. His favourite FYP test was Dostoevsky’s Crime and Punishment, which he read on the plane. He says the text helped him cope with the loss of his grandmother during that time.

“When that kind of investigation goes on in a communal context, I think the level of consciousness is enhanced in a way…”

Now in his second year at King’s, Zargarpour is pursuing contemporary studies and religious studies. He writes poetry and non-fiction in his spare time, as well as volunteering with local organizations Northwood, YouthNet and the Halifax branch of the Junior Spiritual Empowerment Program.

Recently, he has also started up a weekly informal discussion group called Open Soul, which meets every Saturday at the Central Library in Halifax. The group is open to participants of all backgrounds and beliefs, and meets to explore questions of spirituality and ethics.

Zargarpour says his vision for Open Soul is influenced by his Bahá’í faith, which emphasizes “the freedom to interrogate reality for oneself.” He was also inspired by his FYP experience.

“When that kind of investigation goes on in a communal context, I think the level of consciousness is enhanced in a way,” says Zargarpour. “You’re able to benefit from other peoples’ perspectives, especially those that differ from your own, and they—whether wittingly or not—reframe things in such a way that you come to realizations that you never would have otherwise, and I don’t think I really understood that until I came here and did FYP.”