Jen Powley’s powerful memoir to be published by Roseway

Jen Powley’s powerful memoir to be published by Roseway

Jennifer Powley’s health was failing. And, thanks to the cumulative effectives of more than 20 years of living with multiple sclerosis, her voice was no longer strong enough to “properly lead” the kinds of meetings she’d chaired as the Ecology Action Centre’s HRM Coordinator.

But she was far from done with living. 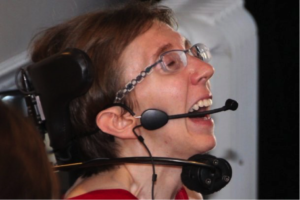 In the spring of 2013, Jen — who’d already earned degrees in social sciences, journalism, and urban planning — was accepted into two post-graduate programs, including King’s then-brand-new Master of Fine Arts in Creative Nonfiction degree.

“The program excited me,” Jen says of her decision to opt for the MFA. “I knew I wanted to write a book.”

And she has. The Ecology of Jen will be published in 2017 by Roseway Books.

During her two years in the program, her original plan for a book about the personal assistants she’d worked with — “the good, the bad, and the ugly” — morphed into “a memoir looking at how someone with a chronic condition like my own can deal with losing my abilities. I have had numerous people tell me that they could never live in a wheelchair,” she says. “I wanted to write a book that told them they could. They might not think it from the outside  but when you are actually in the situation, you just deal with it.”

Roseway’s Bev Rach says Jen’s story of her struggle living with MS is “one we don’t often hear. It’s not sugar coated; she shares the day-to-day details, something most readers don’t have access to hearing about.” The book also fits Roseway’s goal to “publish books about the struggles involved in making the world a better place… Jen Powley’s book is one of those.”

Jen credits her MFA mentor, Lorri Neilsen Glenn, not only for her “wonderful editing suggestions” and “the trust she places in all her mentees,” but also because, “now that I have some distance from the actual mentoring, I can see that she nourished the seeds of my becoming a writer.”

Jennifer Powley is the sixth graduate from the MFA’s program’s first two graduating classes to have signed a book contract, “and we are confident that there will be more, as other recent graduates complete their manuscripts and sign with literary agents,” says Don Sedgwick, the program’s Executive Director.

The two-year limited residency program is a joint offering of the University of King’s College School of Journalism and Dalhousie University’s Faculty of Graduate Studies.

You can find more information about the program and apply here.