King’s alumni met with future King’s students on Feb. 22 in Toronto, informing the younger generation about how their undergrad experiences prepared them for their current careers.

The four alumni panelists were the centrepiece at An Evening with King’s which took place at the Grand Hotel.

“They’ve all pursued different career paths since they graduated from King’s, and one of the most enlightening parts of their panel discussion was hearing them describe what they have in common and the many ways that King’s taught them core skills that helped them succeed in their diverse careers,” says Dr. Yolana Wassersug, Assistant Registrar, Student Recruitment. 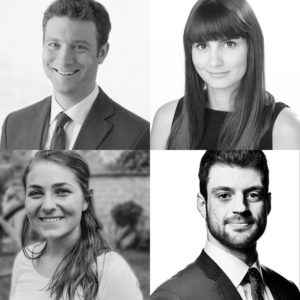 Colin Burn practices law at Stikeman Elliott’s Toronto office and Emma Mew is an epidemiologist at the Hospital for Sick Children. While law and epidemiology are certainly different, both Colin and Emma explained that their writing skills flourished when they did the Foundation Year Program (FYP), and that writing has continued to be a crucial part of their working lives.

Similarly, Justis Danto-Clancy and Emma Teitel both stressed that doing FYP and studying at King’s helped them learn to think for themselves and develop independence of mind—skills that have guided them through their careers in arts and journalism. Justis spoke about how King’s encouraged him to explore many different passions, preparing him for the multi-track career he enjoys today. Emma mentioned that King’s taught her how to stand by her ideas and opinions, an invaluable skill in her career as a national affairs columnist for the Toronto Star. 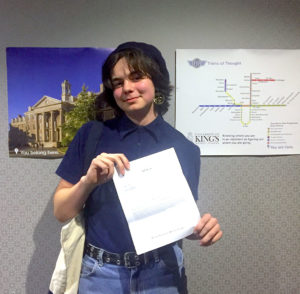 The prospective students enjoyed an insider’s look at King’s and how the university could set them up for their future success. “Watching the panel unfold, and listening as Colin, Emma, Emma, and Justis spoke about their time at King’s, it was clear that there’s a special bond that our alumni share, which is a product of the King’s experience,” says Yolana. All four panelists took a walk down memory lane and reminisced about the good times they had while participating in campus groups like the King’s Theatrical Society, student union, rugby team, and the philanthropically focused Young Alexandra Society.

“We are so grateful to Colin, Emma, Emma, and Justis for spending this evening sharing their insight with our incoming undergrads,” Yolana says.

Students were also treated to a warm introduction from FYP Director Dr. Neil Robertson. And Assistant Registrar Tara Wigglesworth-Hines joined Yolana to help answer any questions that students had about the application process. Tara was able to offer one lucky grade 12 student, Rylan Pembrook, admission on the spot, and when she handed him his admission letter the whole room applauded. Rylan also won all his FYP books for this coming academic year, provided by the King’s Co-Op Bookstore.

“We can’t wait to see Rylan, and many others, in the incoming FYP class this fall,” Yolana says.

For prospective students in Toronto who missed this event, King’s will be back for a Meet & Greet on May 8 at the Arts & Letters Club. You can also join us on campus for an Open House on March 16.