“They’ve been chasing it for so long,” says Neil Hooper, Director of Athletics. “It was really a culmination of a lot of hard work, persistence and patience.” It’s King’s first banner in five years, and “a great moment in King’s Athletics history,” Neil says. 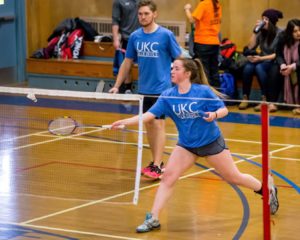 “You could see from the get-go it was going to be a good day,” Neil says. “These teams weren’t going to be denied.”

At the ACAA Awards on Saturday night, King’s students won Female Player of the Year (Sam Lawther) and Male Rookie of the Year (Bryce Mason). Their coach, Ryan MacIntosh (2012), was named ACAA Coach of the Year.

Neil credits Ryan and assistant coach, Spencer Armsworthy (2014), with taking the team to these heights through great coaching and positive attitudes. 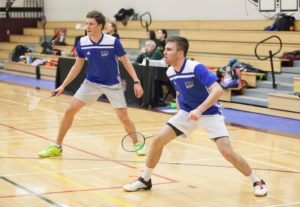 “Those are two very good teams going up there. If they get beat they’ll be beat on shots, not strategy,” Neil says. “We are very proud of them and wish them the best of luck.”

The wins pushed the UKC Blue Devils into third place in the CCAA rankings up from sixth last year. It’s the highest King’s has ever ranked out of the 28 CCAA badminton schools.

Athletics Coordinator Trish Miles says it was dedication that propelled the team. “They were always looking for extra practice time in order to better their game,” Trish says.

All the winning players will return as students at King’s next year, so the team’s future looks promising as well.