Literary journalism is journalism that is brilliantly written, that can be read as great literature. The foremost group of academics in this field, the International Association for Literary Journalism Studies (IALJS), held their annual conference at King’s, May 11-13. 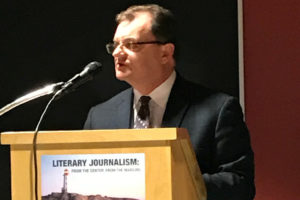 The theme for the twelfth international conference was “Literary Journalism: From the Center, From the Margins.” At the conference, King’s President Prof. William Lahey moderated a panel entitled “Indigenous Literary Journalism: A Global Exploration,” which featured King’s alumnus Duncan McCue (BA ’92) among others.

In a recent newsletter, IALJS President Isabel Soares of the Universidade de Lisboa offered her thanks to President Lahey, and to journalism professor David Swick and Master of Fine Arts in Creative Nonfiction Executive Director Don Sedgwick:

“Thank you to our stupendous hosts at University of King’s College who made everything possible for a great event, one where everybody felt comfortable and at home. David Swick was tireless in making sure everything was perfect. Our gratitude extends to Don Sedgwick, who was so helpful at all times we needed him, and there were many. Rarely have we seen a president of an institution go above and beyond the role one expects of such ceremonial and formal positions, so to King’s College President, William Lahey, we thank you for the warm hospitality with which he received us at the President’s Lodge as well as your genuine interest in our conference by moderating the Conference Host’s Panel on “Indigenous Literary Journalism,” one of the key moments in this conference. From President Lahey we heard that a conference such as IALJS-12 was ‘the place to be.’”

Past conferences have been held in Brazil, Finland, and at the American University of Paris.