Sophia Josenhans chose to study at the University of King’s College because it allowed her to keep two things she loved in her life: volleyball and the ocean. Hailing from Lunenburg, N.S., Josenhans grew up on the water and became an avid sailor. Studying sustainability and oceanography and earning a spot on the Blue Devils’ women’s volleyball team, she transitioned to her second home quickly in Halifax at King’s.

“Halifax is such an amazing city because it has so many different things to offer, it has so many distinct regions, but it’s still small enough that everywhere you go you always have a community, and King’s is especially nice because they [King’s and Dalhousie] are so close and knit together, but I can’t imagine going to another city like Halifax. You get all the experiences of being in a big city but you also still feel like home and you never feel overwhelmed,” says Josenhans. She enjoys hanging out at Point Pleasant Park and visiting nearby beaches when not studying. But it’s been volleyball that has really helped her find her niche.

“My roommate and I were both on the volleyball team, and within the first week [of school], we started having this habit: every afternoon when it was sunny, we’d go out and play volleyball in the Quad,” Josenhans said. “We would do it for hours.”

The passion Josenhans has for sports helped make for a smooth transition to university. “King’s has a great athletic community. We try to host events with each other,” she said. “At least with the volleyball team we make an effort to always go to other athletes’ games and, personally, I make friends as much as I can with other athletes.”

Playing on a varsity team has not hindered Josenhans in her studies and instead she believes King’s has helped her find that scholar-athlete balance. “I think I’ve really become really good at my time management,” she said. “I think that’s helped me progress as a person.”

Josenhans is seeing changes with herself away from the court and classroom as well. “King’s really encourages people to become more open-minded and more accepting,” Josenhans said. “Also, it gives you an opportunity to think more critically about the way you view the world and how you interpret and respect other people’s opinions. I think King’s has really opened my eyes to a whole lot of new points of view and it’s definitely made me a more critical and open and understanding person.”

King’s and Dalhousie offer mix of opportunities and resources 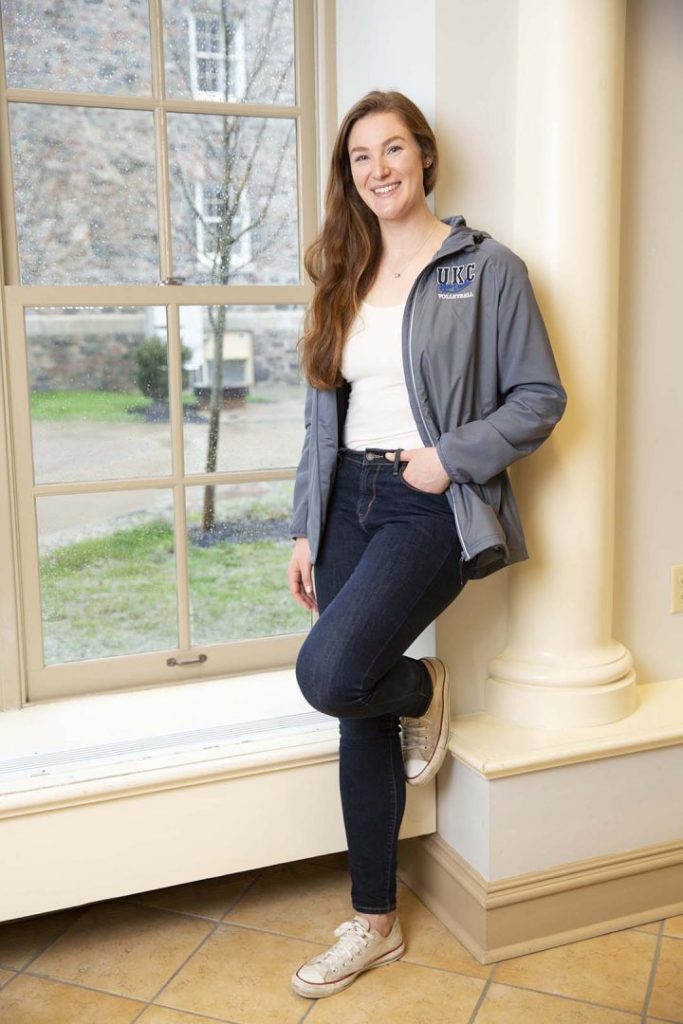 Now in her fourth year, Josenhans will soon be moving on to the next chapter in her life. She played her last home game as #14 with the Blue Devils women’s volleyball team last weekend. She looks at her time at King’s and thinks of its little corner on the Dalhousie campus. She describes it as open and welcoming. “There really is a little bit of something for everybody. I’ve totally met all the different kinds of people here at campus.”

Studying sustainability and oceanography, Josenhans splits her time between the King’s and Dalhousie campuses. She believes the neighboring schools offer a lot of opportunities and resources for students of each. “I spend a lot of time over in the [Life Sciences Centre] for my classes,” Josenhans explained. She has been able to get to know a lot of her classmates who are full-time Dalhousie students. “Spending time with them, I feel like it’s an opportunity through King’s to meet people like that that I wouldn’t have if I went anywhere else. And there’s just s much more things that are available to you when you go to King’s when compared to if you went anywhere else.”