Michael Cobden, the former Director of the King’s School of Journalism, has died at the age of 77. 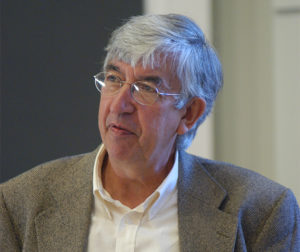 A South African by birth, Michael joined King’s as Director of the Journalism School in 1988 after a long and distinguished career in newspapers, including the Rand Daily Mail, the Toronto Star, and Kingston Whig-Standard. He served as director for eight years (1988-1996) during a period of rapid growth in the School and the beginning of a dramatic revolution in journalism and journalism education. From 1998 to 2005, he served as the College’s Maclean-Hunter Chair of Journalism.

Noted Stephen Kimber, who succeeded him as Director: “Michael was a fascinating, complicated guy who cared passionately about journalism and about his students. Some students chafed at his perpetual you-can-do-better encouragement and his occasional glass-half-empty worldview, but it was clear to anyone who got to know him that Michael’s push for perfectionism came from the best place—a desire to make his students better journalists and the world a better place.

“Within the School, he pushed us to develop more real-world opportunities for our students, transforming what had been a bland printed record of student work into a lively and controversial community newspaper, The North End News, which published weekly for about a decade. At the same time, Michael embraced the academic side of King’s in ways that most of us hadn’t and helped bring the School of Journalism into the King’s mainstream for the first time.”

Added Tim Currie (BJ ’92), the current Director of the School of Journalism and a former student of Michael’s, “Like many former students, I remember Michael affectionately for his quirky, straightforward manner and deep passion for the craft of journalism. He truly enjoyed spending time with students. He had a sharp, endearing sense of humour and an infectious love for language.”

After he officially retired in 2005, Michael was appointed an Inglis Professor. He also continued to be active in journalism and in international journalism education. He led a journalism education project for UNESCO, and wrote a report on making humanities research more accessible to the public for the Social Sciences and Humanities Research Council. He taught journalism at the Asian College of Journalism in Chennai, India, as well as English as a Second Language at Dalhousie, and served as a tutor in the Dalhousie Writing Centre.

In 2016, Nimbus published his book-length biography of Simon Spatz, a Holocaust survivor who became a prominent Halifax developer.

There will be a memorial to remember and celebrate Michael’s life on Saturday, January 6, 2018 in Alumni Hall. A reception will follow in the G. Peter Wilson Room. In lieu of flowers, donations in Michael’s memory can be made to a charity of your choice.

To honour his memory, the King’s flags will fly at half-mast from January 2 to January 6, 2018.