While a high school student in Windsor, Ont., Nick worked with his school board to develop an environmental curriculum that was accessible for all students. He was also serving as an ambassador for Community Living Ontario as he led efforts to build a school garden that all students could enjoy, regardless of their physical or intellectual abilities.

The garden was installed in his school’s interior courtyard where high-risk students could be observed, and the garden beds were raised so students in wheelchairs could benefit from the therapeutic benefits of gardening, too. They grew milkweed, because it attracts monarch butterflies which are essential to healthy ecosystems. The garden project was so popular, it is now being adapted by other Ontario high schools. As a result, Nick did a series speaking engagements for Community Living Ontario.

“It is what makes me happiest,” Nick says of public speaking. He’s given talks on the secret to happiness, the power of perceptions, and ability and inclusion. “It’s fulfilling when you see someone’s eyes light up and you drive them to go do something.” 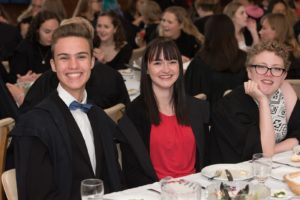 Nick with friends at formal meal.

Initiating community projects and public speaking aren’t Nick’s only extra-curricular activities. He also loves debate, and since coming to King’s a mere month ago has become the King’s Students’ Union Arts representative, a tutor with YouthNet and a member of the King’s Theatrical Society.

“The busier I am, the better I manage my time,” Nick says.

Loran Awards, valued at $100,000 over four years, are granted to students showing outstanding character, service and leadership. This year there were 5,023 applicants across Canada, and 34 earned the Loran Award—the largest class of scholars in the foundation’s history.

Loran Scholars can choose what university they attend, and though Nick had several schools on his short list, as he weighed the variables the decision to attend King’s became clear. King’s meets his academic objectives and allows him to live within a community, which was essential to Nick. “I needed a family aspect and I found that here,” he says.

Nick’s now immersed in the Foundation Year Program and loves the supportive nature of it. “People are willing to just say ‘Hey. You’re struggling now? Let’s sit down together and look over your stuff and make sure you’re doing well.’ ”

He also had a surprise lunch companion on one of his earliest days at King’s. “A gentleman came over and was talking with me and sat in Prince [dining] Hall across from us. When he left I asked my friends, ‘Who was that?’ and they said, ‘That’s Bill Lahey, the president of King’s.’ I had no idea! I didn’t know that happened—that the president of a university would come down and sit with you and talk with you.”

Nicks’ generous nature was born, in part, by a medical situation he endured that landed him in and out of the hospital for about a year. “I literally couldn’t see. I’d stay up all night and sleep all day because my eyes were so sensitive to light. I had people who supported me through that process. I had a teacher who came every single day to my house at 6 a.m. making sure I was successful. And there are so many other students who don’t have those same opportunities to be successful. So, if I’m willing and able to provide opportunities for people like that, then I’m going to do it, right?”

Though it’s still early days for Nick at King’s, he already has a clear idea of the path he’ll follow.  He plans to enroll in the honours Contemporary Studies Program next year and double-major in philosophy or political science.