“We’re building workflow and playing with formats and apps as we go,” Professor Sue Newhook says. “Students learn that you don’t need a big TV studio or a license for Job One: to commit acts of journalism.” 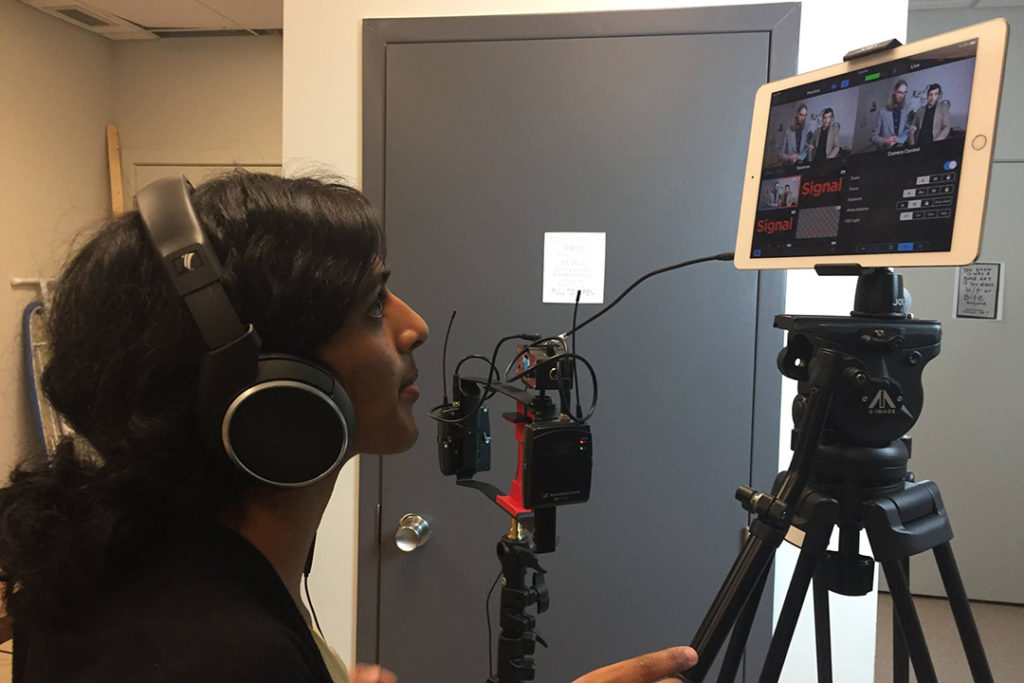 Having learned the basics of visual storytelling in prior introduction to broadcasting reporting courses, the students hit the ground running in November when their classroom becomes a newsroom. Students pitch their story ideas at morning meetings then fan out into the community to interview people and shoot video. Back on campus they edit their stories.

Mike Rossi has been the class technical advisor for seven years and says he’s seen the show become increasingly compact. He admits forgoing production cameras for the live show was at first hard for him to wrap his mind around. “It used to be that the idea to shoot on an iPad was frowned upon…but the quality doubles each time you get a new piece of equipment.” As the show’s director, Mike takes stories off their desktops and transfers them via wireless memory stick to the iPad camera roll.

This year, the shows were broadcast over YouTube and Facebook Live to audiences that grew into the hundreds as the six-week workshop progressed. They’re also archived here so students can have this work as part of their digital portfolios when they graduate.

“They’re going to go into newsrooms all over the world,” Sue says. She adds that the format lets them know that they don’t need tons of gear to tell stories, calling it “nerdy goodness.”

Tunde Balogun is a student in the class. He says it’s stressful, but that’s the best part: “You never know what’s going to happen.”

Tunde’s favourite story he worked on this semester was about fencing and a group of youth preparing for a competition. He gained newfound respect for the sport after getting a lesson and sparring with a fencing instructor for two minutes. “It’s an intense, brutal, hard, physical sport,” Tunde says.

While in this six-week workshop, students take no other classes. They work through fall reading week, holidays and weekends. It’s like a full-time job but more work, they say. They are reporters every week, and also take an additional role on show day such as as producer, host or social media producer.

“They’re buzzed every damn day,” says Sue. “Visual journalism is harder than text but once they have a grasp of this stuff and a [smart] phone they can do amazing things. And I think they’re figuring that out.”