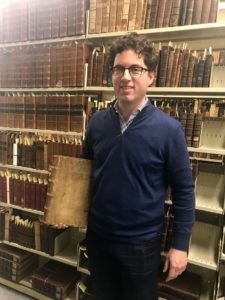 Since 2011, more than 4,000 books have been photographed to comprise the collection, which continues to grow (about one-fifth of the collection is on the website at present). It includes a first edition of Paradise Lost, early editions of Shakespeare’s plays from the 17th and 18th centuries, early printed herbals, natural histories, bibles, works of science, travel and philosophy, classics, literary first and early editions, and more than 40 incunabula (15th century printed books), including a 1497 edition of the Nuremberg Chronicle of world history.

“We also have every volume of the first edition of [Comte de] Buffon’s Natural History in 49 volumes [1749-88],” Colin says. For a monthly $8.95 U.S. fee, subscribers have access to the complete collection, which will comprise more than 400,000 photographs that can be read as books, and can be searched and navigated by tags and keywords across specific titles and specific images.

Colin, who now lives in Ottawa, nurtured his love for rare books while a contemporary studies and political science student at King’s.

The King’s Library, which Colin toured when returning to King’s for a visit in early January 2019, contains Special Collections of nearly 20,000 volumes, which includes medieval and renaissance manuscripts, incunabula, and thousands of 16th, 17th, and especially 18th century volumes. The Library’s Bray Collection has been designated as a “Special Collection of Research Value” by the National Library of Canada.

Colin named his website Codex, he explains, because the word describes books as we now know them—sheets of paper or parchment folded to form a quire of leaves, and these quires tied together to create the book.