Samantha Machado of Winnipeg and Michael Kishchuk of Whitehorse, Yukon, may be a long way from home, but they’re enjoying the benefits of a King’s education, as this year’s recipients of the Donald R. Sobey Family Scholarships.

The Sobey scholarships, established in 2014, are unique to King’s. Valued at $50,000 over four years, they recognize academic excellence, demonstrated leadership skills and community involvement. Only two Sobey scholarships are awarded annually, open to students from across Canada entering first-year studies at King’s. 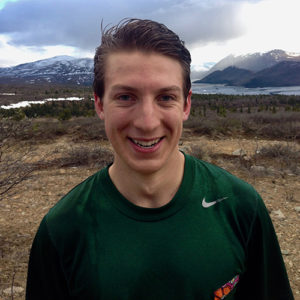 Michael’s home away from King’s is in the Yukon.

And Michael—a top student and active in social justice issues—couldn’t be happier. “I am enthralled with King’s. It’s a magical little school where everyone is just so intelligent and kind,” he says. “I have been so impressed by the depth of conversations here, whether they happen in tutorial or over dinner, or on a sunny afternoon in the quad. There are so many brilliant people here and I’m honoured to become part of this community.”

“Though I’m missing the mountains of home, I’ve really enjoyed the excursions the Chapel has planned, such as to Cape Split, and the recent President’s Hike,” Michael adds. “Exploring the country outside of the campus has helped develop my sense of King’s as home.” 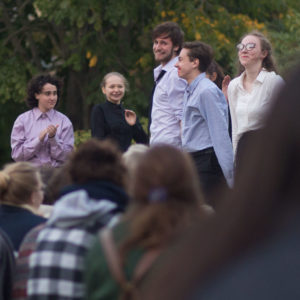 Samantha has joined the King’s Theatrical Society and is pictured here (far left, wearing purple) performing in the Classics in the Quad production of Antigone on Oct. 14.

Samantha agrees. “I am loving King’s so far,” she says. “The Foundation Year Program is fascinating and engaging, and the community has been very friendly and welcoming. It’s a lot of work, but totally worth it.” Samantha dove right in to life at King’s, having already been involved in the KTS Classics in the Quad production of Antigone. You can also catch her in the upcoming Dalhousie Theatre Society’s performance of The Rocky Horror Picture Show.

While the Sobey name may be more commonly associated with business education, Donald R. Sobey believes passionately in the humanities. “In every field of endeavour today—business, medicine, law, government, education—success depends on people who understand the achievements and failures of our past and have the intellectual flexibility to deal with the unknown challenges of our future,” he explains. “The study of the liberal arts produces such people. They’re innovators.”

Says his son, corporate director Rob Sobey, “It’s no surprise that one-third of Fortune 500 CEOs have a liberal arts background. I think students of the liberal arts are very well-positioned to be leaders of tomorrow.”