Jody Connors didn’t believe what she was reading.

The Grade 12 student from Toronto, Ont., was home doing online schooling in mid-January. She was reading an email from Tim Currie, the director of King’s School of Journalism, telling her that she had won King’s Photo Essay Contest. Connors sent the email to her mom at work to confirm that she read the email correctly. Her mom replied, “OMG.”

“I was like, this can’t be actually happening, I really did not think that something was going to come out of it,” says Connors. The contest Connors won is a competition for high school students to take a six-to-10-picture photo essay showing ‘a sense of place.’ Students could watch and ask questions during a workshop taught by Jeff Harper, a photojournalism instructor at King’s, and put their skills to the test in the competition.

Connors shot her photo essay (see below) of her friends skating at Nathan Phillips Square in downtown Toronto. A yearly tradition, it kicks off their winter break. Connors captured different elements of the square, such as skating on the rink and the city lights that surround it, buying food at a food truck and the lit-up Toronto sign.

“The goal of photojournalism is to transport people to places and to give a feeling of what it’s like to be somewhere and I think Jody’s submission really transports people to downtown Toronto and Nathan Phillips Square and gives the feeling of what it’s like to be there,” says Jeff Harper, who judged the submissions. “I have never been there, but it feels like I’m a fly on the wall in downtown Toronto.”

Connors has seriously pursued photography since taking a media arts class last year. She received a camera for Christmas in 2020 and would use it to take photos with friends. Her mom is a teacher and heard about the King’s photo essay contest and encouraged Connors to enter. Connors chose Nathan Phillips Square as her subject because it’s in the heart of downtown Toronto.

“I knew I could get something there, especially during the holiday season,” says Connors. “It’s such a bustling place, there’s so much energy and it’s really fun, so I knew when I took my camera I would get something no matter what.”

Connors followed four friends that evening to capture life in the square. In one instance, Connors stood on the Toronto sign with her friend in front of it, having the blue light hit his face. She took the photo and showed it to her friends, who loved the effect it created.

“It was fun to do it with my friends there because I would just take photos for fun when I do it normally, so I didn’t want to deviate from what I normally do,” says Connors.

Before this contest, Connors only shared her photos with her friends and family, and she said it was a big step for her to share them. She is not always confident in her photography but was happy with what she produced for this contest.

“In a project like this, I learned to let go and just see what happens naturally and that’s when you get the best outcome,” says Connors.

Her advice for anyone trying to get into photography is to take lots of photos.

“Don’t be scared. I don’t really know anything about photography. I just took a camera and took photos and they look good. Just try to take photos of things that look good. Don’t get too caught up in the details of settings on a fancy camera or anything. For years all I had was an iPhone 4 and an iPad and walked around taking photos on a small digital camera. You don’t need impressive stuff. You just need to look around and see what you think is beautiful.”

“Just take a million photos. You may get something good.”

Panet-Carino took her photo essay while she was living abroad in Costa Rica this fall. She was working at an eco-lodge in the jungle and became fascinated with the nature around her. She shot her photo essay about how nature is dependent on itself, capturing scenes like a moth pollinating a flower or ants eating from a tree.

“For the first time in a while, I wasn’t taking pictures of portraits and I used to rely a lot on people to come up with ideas,” says Panet-Carino. “It was really interesting to be able to rely more on my surroundings and the lighting that day, what the weather was going to be like and what I could find around me. So that really inspired my topic.”

Taking photos of wildlife had its challenges. Panet-Carino couldn’t ask them to pose or be in a specific location at a particular time, she had to figure it out herself. With the abundance of wildlife where she lived, she examined which areas and which times of day were the best to capture photos. She learned that the insects would go to the flowers in the morning and that she would have good lighting then, too.

“It’s stunning, it’s sharp, you feel close to the subjects, which isn’t easy to do with wildlife,” says Harper. “An extra barrier with nature is trying to get close enough to photograph it. If you ever tried to photograph a bird or a squirrel in your backyard, you know it’s tricky. The closeness we get to wild animals here really paints a wonderful picture of Costa Rica.”

Similar to Connors, Panet-Carino was surprised when she was named a winner.

“I was really happy, I was a little bit shocked,” says Panet-Carino. “I’ve never done much with my pictures. I have an Instagram account for it and I would collaborate with different photographers and people, but I never put my photos to the test. So it was really shocking and exciting.”

Ian Curran shot his photo essay closer to home. He featured the S.T.E.M and Innovation Wing at St. Stephen High School, where students guide their own learning for skills that the school doesn’t have a specific class for. Curran’s submission shows students working on various projects like journalism, 3D printing, coding and sewing.

“Ian’s submission really shows what it’s like to be behind the scenes in the innovation wing,” says Harper. “It gives us a great picture of everything that happens in a pretty unique space in a high school.”

“It’s been a monumental part of my life and really helped shape me and find my career path,” says Curran.

Curran participated in both the competition and the photojournalism workshop and found both helpful. He hopes the contest will continue next year.

“I’m very grateful for this opportunity and I definitely think this competition should continue,” says Curran. “I’ve learned so much by doing this and attending that webinar. I think it helps inspire youth to pursue journalism and help take the first step and say, ‘yes, this is what I want to do’.”

“Canada’s largest city, and my home, Toronto, Ont., is a crossroads for people of all cultures, backgrounds and walks of life. This city is often recognized as one of the most diverse locations globally. Though the city proper is home to nearly three million people, each individual holds specific Toronto locations, both big and small, close to their hearts. For many Torontonians, during the holiday season and beyond, City Hall and the surrounding Nathan Phillips Square is the ideal meeting place to form bonds, maintain traditions and create new memories. It is a location where language barriers, financial limits and other common obstacles cease to exist. Rather, the joy and festive energy provide a ubiquitous glow that emanates through all. In a place as large as this, it is easy to get lost in the chaos and the energy, but if you look closely, it is simple to see that each person or party has their own stories to tell.

While the skating rink is the centre of our attention, the coloured lights, smell of food, nip of the cold winter air and sounds of the downtown core provide an atmosphere that is not easily captured elsewhere. Especially with the realities of a pandemic, these simple examples of delight have been difficult to come by. Nathan Phillips Square provides much needed opportunities to rekindle relationships with family and friends by introducing a safe outdoor environment filled with physical activities, food, music and most importantly, the magical sounds of laughter. For me, the square is a good excuse to step away from my daily routine.” 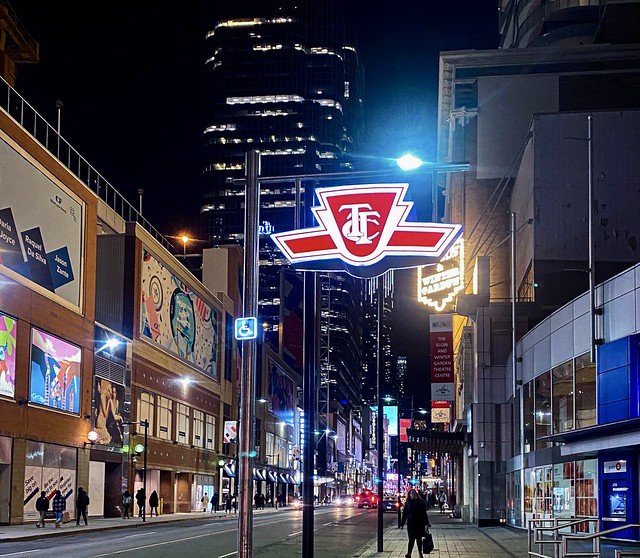 Best photo from each entry [PDF]