Leah Woolley is on a mission of self-improvement, which for her includes studying at King’s and serving in the military.

In 2016, King’s student Capt. Leah Woolley needed to take a break from her studies—to go serve in Afghanistan.

The military reservist was assigned to work as an intelligence officer in an operation to protect the Canadian Embassy in Kabul.

“It was pretty normal to hear explosions just around the city,” Woolley said. She was in Kabul for the May 2017 truck bombing near the German embassy that killed more than 150 people and injured 450 more. It was the deadliest attack the city had ever seen. “There, the warzone is normal,” she said. “Everyone is completely and utterly adjusted to the warzone. You don’t notice that you’ve adjusted to it until you come back.”

Leah writes for the Signal: 'Exploring the military-journalist relationship'

It’s an understatement to say Woolley had to readjust to life as a student when she returned to the University of King’s College in the fall of 2017. But lessons Woolley learned in the military have helped in the classroom as well. Now in her final year of a double honours degree in journalism and international development, she says she has more confidence and time management skills thanks to her military experience. And while she admits it’s still sometimes difficult getting excited about writing essays when once bombs were going off dozens of feet away from her office, she is more comfortable expressing herself and feels reassured she can succeed in the world beyond King’s. Working in intelligence at the centre of one of the biggest conflicts in the world also taught her some things, too. “I have a much better understanding of how global politics work, which is very helpful for the international development side of my degree.”

Woolley was so grateful for King’s support through this entire experience, she nominated the university for the Canadian Forces Liaison Council’s (CFLC) Awards. At an event last week at the Nova Scotia Lieutenant-Governor’s Residence, King’s received three awards for supporting Wolley during her time off. 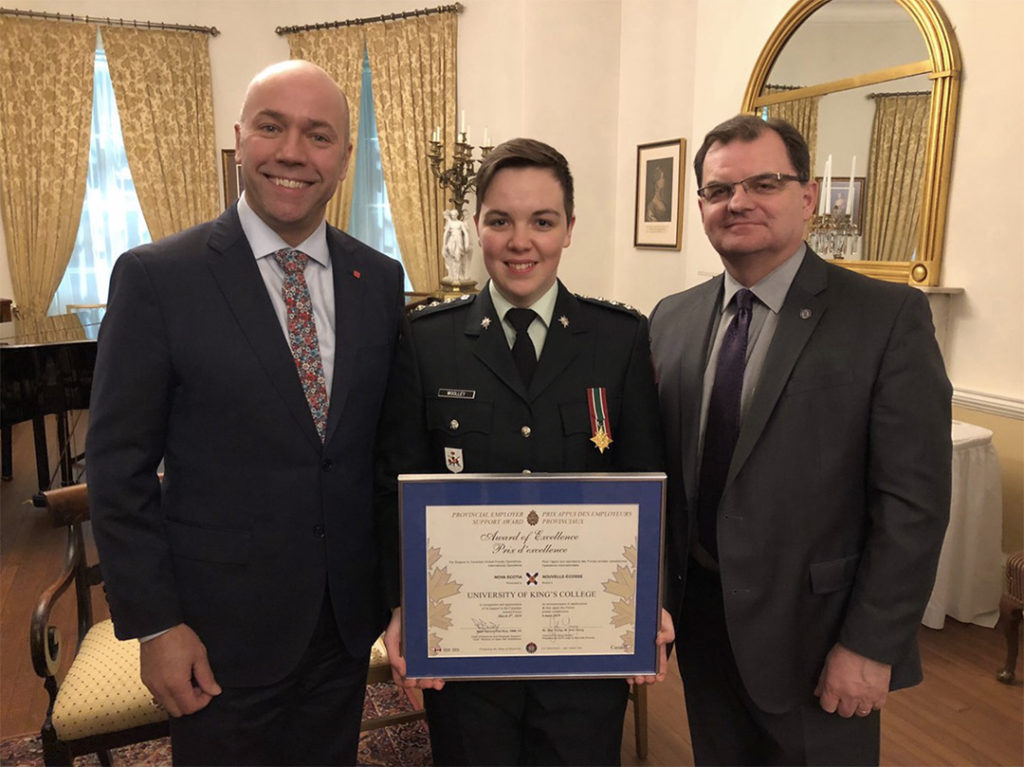 The Fort Erie, Ont. native grew up in an army home. Her father and mother both served in the Canadian Armed Forces (CAF). Woolley initially rebelled against the idea of joining the army, but she admits it was more of a rebellion against her parents. Now 23 and having spent five-and-a-half years in the reserves, she understands the pride they carried with them.

“It’s very much about learning constantly and self-improvement and always getting better,” Woolley said. “So, it’s really easy to be proud of that and feel good about it.”

It is that attitude that helps Woolley handle confrontations with family, friends and even other students who challenge her involvement with the army. “Especially on this campus,” she laughed. “I do get into a lot of friendly arguments with people, even my friends.”

Her parents still share anecdotes from their experiences in the armed forces. “My mom often talks about military training as being what taught her she could be more than she was.”

And for Woolley, the combination of learning from both her military experience and studies at King’s has been powerful. “If King’s told me I couldn’t have done it, I wouldn’t have gone,” Woolley said. “It meant a lot to me for King’s to allow me to do that.”