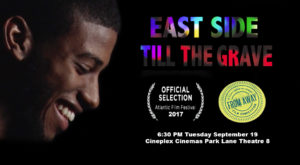 Made in 6 short weeks for the documentary workshop taught by Professor Sylvia Hamilton, King’s Rogers Chair in Journalism, East Side Till the Grave is a 10-minute short documentary film that dives into the world of African-Nova Scotian rapper MAJE, whose story reveals obstacles within Halifax’s hip-hop community, and the genre’s influence on the city’s culture.

The film was selected for the Atlantic Film Festival as part of From Away, a film competition for Atlantic post-secondary students launched as part of Canada’s 150th celebrations. Student filmmakers were asked to “examine, explore or celebrate Canada as home as both a concrete and abstract space – a landscape, a person, a feeling, a memory – through the medium of film.”

Check out a trailer for the film below, or buy tickets for the Atlantic Film Festival showing.