Journalism professor Sylvia Hamilton, an acclaimed documentary filmmaker, writer and multi-media artist, and a descendent of the Black Refugees of the War of 1812, has spent her life uncovering the lives of African Canadians through her films, poetry and art. In the wake of winning the 2019 Governor General’s History Award for Popular Media: The Pierre Berton Award, Hamilton is quick to deflect any praise onto the people and their stories she has highlighted throughout her career. Hamilton says African Heritage Month (aka Black History Month) is a good starting point, but these stories need to be told and celebrated year-round.

Her Excellency the Right Honourable Julie Payette, Governor General of Canada, presented you and the other 2019 Governor General’s History Awards recipients during a ceremony at Rideau Hall, on Monday, Jan. 20, 2020. How would you describe it?

“It was quite a remarkable event in Ottawa. I’m still processing the enormity, in many ways, of the award and of the events.”

Why was it important for you to highlight your ancestors when you were recognized for this award?

“I’m very conscious of the fact that people who look like me, who are in North America, are only here because of the transatlantic slave trade. They’re the direct reason why I’m here, because they had this thirst for freedom. They were very bold people, and under great danger to themselves, decided that they wanted something different, and I’m a direct beneficiary of that.” 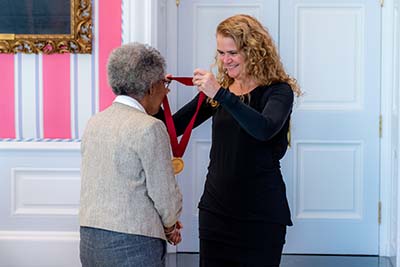 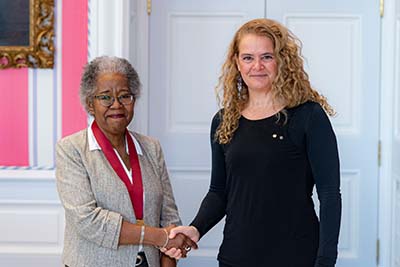 What is a common theme throughout all of your work?

“The idea of uncovering stories, uncovering experiences that haven’t been valued previously, that haven’t been exposed previously. Because I use different creative vehicles, [I’m] finding ways to tell those stories that can engage people at different levels. People may come to the work with certain levels of knowledge and my hope is that people can then find something in the work that will inform them, that maybe have them ask questions. It’s about exploring stories and experiences that haven’t been told before and that are essential to the understanding of Canadian history, Canadian society, Nova Scotia history, Nova Scotia society.”

What does African Heritage Month mean to you?

“What’s important is that 12 months of the year this history is important. February is a moment to highlight that, but it’s not the only month. And, I think what is significant is to pull that history and understanding the various contributions of people of African descent throughout the entire year because we need to learn about it all the time. February is a great marker…but it should not end there. You should not cram everything into what is often the shortest month of the year.”

Hamilton’s films include We Are One (2011), The Little Black Schoolhouse (2009), and Portia White, Think on Me (2000). She has authored several essays and articles, released the book of poetry And I Alone Escape to Tell You in 2014, and been a speaker at Walrus Talks. Her multimedia installations combining text, still and moving images, sound and objects to explore the interlaced themes of personal and collective history in the lives and experiences of African Canadians across time and place, have been exhibited at the Art Gallery of Nova Scotia and the Royal Ontario Museum. Hamilton has been teaching documentary journalism at King’s since 2004 and is currently also the Rogers Chair in Communications. Her previous awards have included a Gemini, The Portia White Prize, the CBC Television Pioneer Award, and the Queen’s Diamond Jubilee Medal. She received her 2019 Governor General’s History Award alongside King’s Inglis Professor and historian Dr. Shirley Tillotson, who received the 2019 Governor General’s History Award for Scholarly Research.