Dr. George Elliott Clarke told students at the final Foundation Year Program (FYP) lecture of the year that throughout their lives they would be faced with moral and ethical questions they may not even be able to conceive of now, but assured them they would be equipped to confront them when the time came.

In his guest lecture called, “Now that you have the foundation, what do you intend to build (intellectually)?”, Clarke implored those gathered to use the FYP model of learning as a model for approaching life, by journeying through history to better understand and make decisions in the present.

Clarke, a renowned poet, playwright, novelist, professor, social activist and public intellectual, offered two examples to illustrate his point about history revealing the answers to problems in the present. 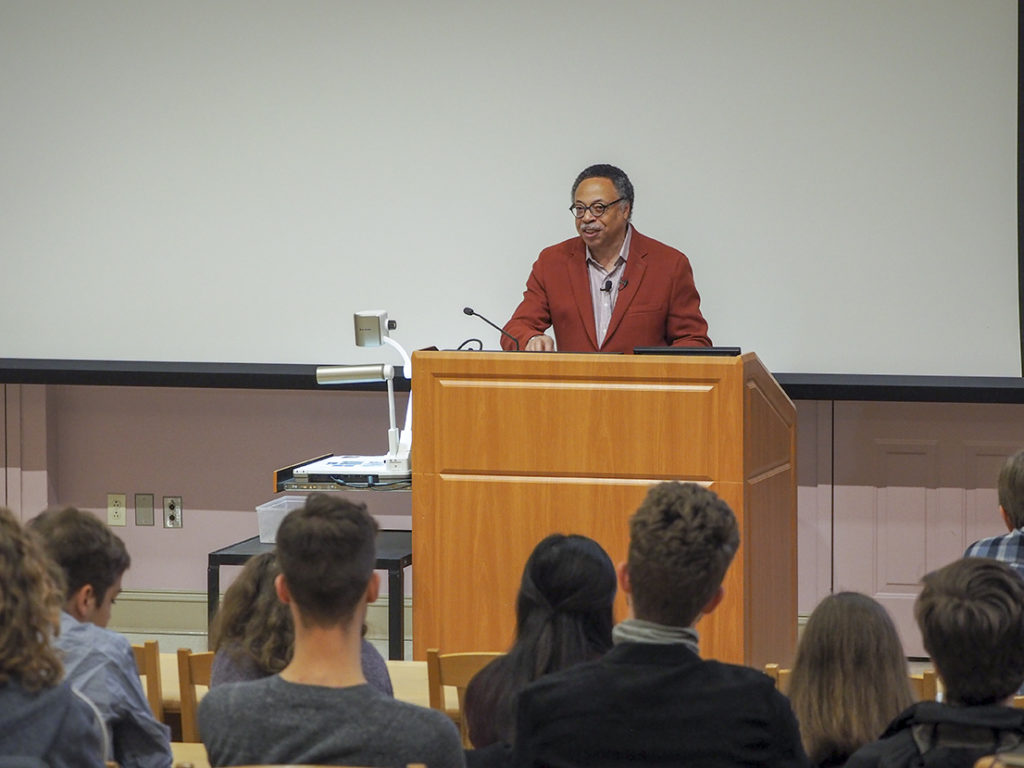 Dr. George Elliott Clarke delivered the final lecture of the 2018/19 Foundation Year, entitled “Now that you have the foundation, what do you intend to build (intellectually)?”

The first example was the Trans Mountain Pipeline, which will carry crude and refined oil from Alberta to the coast of British Columbia pending federal government approval.

When Pierre Elliott Trudeau was considering approving the Mackenzie Valley Pipeline in 1974 while he was prime minister, Clark recounted that he [Trudeau] decided to consult with Canadians, including Indigenous peoples. He started the Berger Commission to investigate the social, environmental, and economic impact of the proposed gas pipeline that would run through the Yukon and the Mackenzie River Valley of the Northwest Territories. The commission recommended that no pipeline should be built.

“A report was tabled that said ‘no pipeline should be built’ and it was not. I was waiting for a journalist to reference this recent history when Canada got a progressive answer. Someone had to do some homework. Dust off some Hansard’s. See what the past taught us,” Clarke said.

Pipeline construction is a complex issue that requires interdisciplinary consideration of subjects including economics, political science, and the constitution. “All of us should have a working knowledge of [those],” he said, decrying the lack not only of basic literacy in society, but social-political history in particular. Without it, he said, “You’ll be bamboozled.”

“Always put your hand up, always put yourself forward…it’s ok if people wants to challenge it…voice your ideas.”—George Elliott Clarke

His second example was America’s invasion of Iraq in 2003. Based on the Iraqi army’s near annihilation just prior, plus crushing sanctions and the years-long imposition of a no-fly zone, Clarke said it seemed improbable to him at the time that Iraq would have been able to manufacture weapons of mass destruction, the stockpiling of which was the justification the U.S. used to invade Iraq. After thousands of people were killed the truth came out: there were not and had never been weapons of mass destruction in Iraq. Newspapers including The Times of London and The New York Times said, ‘Sorry we got it wrong.’

“Their failure to follow up responsibly meant fake news could exist. Failure to hold governments to account made it possible for someone like Trump to come along a few years later and say, ‘You can’t trust the news media.’ As a socialist I had to concede that the right had a point,” Clarke said.

“I ask you to apply your knowledge you’ve gleaned through FYP to question everything. To hold governments to account.”

Clarke shared his own life story of being into poverty in Windsor, N.S., and raised in Halifax. He said he remembers being in classrooms in which black kids were streamed. When he was in grade seven at Bloomfield School, he was one of the children issued a Social Insurance Number so they’d be ready to quit school and enter the work force. He stressed that every job is dignified but said the system undereducated some citizens so they could be exploited as cheap labour.

Of the approximately 150 students from Bloomfield School that resisted dropping out to work and went on to Queen Elizabeth High School, only 10 graduated on time and only three graduated with university preparatory courses, Clarke said. He was among the three. “I was one of the lucky ones,” he said.

He credited his earliest teachers, including [former leader of Canada’s New Democratic Party] Alexa McDonough, librarians at the Halifax North Memorial Library, and later in his life social activists Burnley [Rocky] and Joan Jones, and fellow poets including King’s Journalism Professor Sylvia Hamilton, for encouraging his poetry and thought.

Though he now holds a BA, MA and PhD, university wasn’t always a given for Clarke. “I thought I should just hang out and be a hippie. Joan Jones said no, you have to go to university. She said, ‘Always put your hand up.’ When you think you know the answer don’t be shy. Put yourself forward. Ask that question. Make that assertion. It’s ok if people want to challenge it but voice your opinion. Ask your question. Don’t let someone else do it for you.”

Clarke ended by saying in the absence of anyone else doing it, he finally wrote an article about Trans Canada pipeline citing the Berger Commission’s findings and voiced his opinion. “Next thing I know the CBC was analyzing how Justin’s process differed from his dad’s.”

Before concluding with the recitation of two poems, including one he’d newly penned in tribute to his dear friend, the recently departed social activist Joan Jones, and one about an escaped peacock from Toronto’s High Park Zoo (watch Clarke recite “The Peacock’s Throne” in the video below) he left the students with one final piece of advice:

“Be a public intellectual. You are a threat to the state. You might as well just own it,” he implored them.

King’s is grateful to George Elliott Clarke for delivering the final Foundation Year Program lecture of the 2018/19 academic year.

Invigorating news
A rebel inmate has escaped
The High Park Zoo
And gone recklessly on the lam
Yet who can fence in majesty?
Who can imprison a cathedral?
Who can lock up dream?
What bureaucrat can cage the sun?
There’s something Persian about a peacock
Versifying Omar Khayyam
To be at large crooning in the wilderness
Strutting a stained glass fan
Making it’s peacock’s throne the very sky under pebbles of clouds…