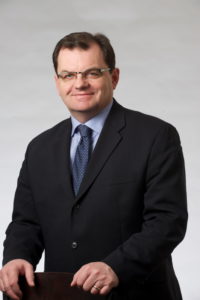 William Lahey, Associate Professor at Dalhousie’s Schulich School of Law and former senior public servant, has been appointed next President and Vice-Chancellor of the University of King’s College. Lahey will be the 25th president in King’s 227-year history, succeeding George Cooper, president since 2012. Lahey’s five year term will begin July 1.

“I am confident that with Bill’s commitment to scholarship, public service, and sound administration” said Godsoe, “he will provide outstanding leadership for King’s in the coming years. He values the liberal arts and understands the uniqueness of our interdisciplinary Foundation Year Programme, our innovative School of Journalism, and our important relationship with Dalhousie. We look forward to the journey we will take together.”

Students were pleased by the inclusive consultation process conducted by the Presidential Search Committee, and impressed by the committee’s focus on student issues throughout its work. “We are proud to have participated in a group that gave so much attention to the needs and views of King’s students,” said Aidan McNally, President of the King’s Students’ Union. “Students greatly look forward to working with Professor Lahey, and we expect he will model the inclusivity demonstrated by the search process.”

Lahey received his undergraduate arts degree from Mount Allison University, followed by degrees in jurisprudence from Oxford University, where he was a Rhodes Scholar, and a Master of Laws from the University of Toronto.

He is a scholar who works at the boundaries between law and other disciplines: history, political science, public administration, economics, health and environmental sciences. He began his career as clerk for Mr. Justice La Forest of the Supreme Court of Canada, has been Deputy Minister of Nova Scotia’s Department of Environment and Labour, head of the Dalhousie Health Law Institute, and is frequently called upon to help sort out some of this region’s most difficult and interesting public policy challenges. At his heart, he’s an educator who says that his proudest professional accomplishment is the contribution he has made to the lives of his students. Lahey comes to King’s from Dalhousie’s Schulich School of Law.

“I understand and believe in the power of an education in the humanities combined with a small college community experience within a larger university context. Equally, I understand the vital importance of journalism to our society because of my broad engagement with public affairs,” said Lahey. “King’s innovation and leadership in both is illustrative of the University’s distinctiveness as a small university which is special not only because it is small but also because it thinks and acts big on a large canvas. I welcome the opportunity to ensure the importance of King’s is deeply understood, appreciated and concretely valued both at King’s and in the wider community.”