Community members, journalism faculty and students gathered at King’s for event organized by New Brunswick’s Looking Out For Each Other advocacy group 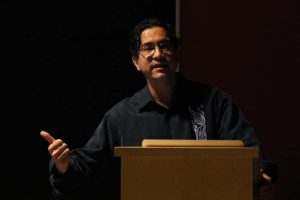 Journalist Duncan McCue was among the speakers at a two-day session on reporting in Indigenous communities.

A two-day workshop held at King’s last week examined ways the news media can do a better job when reporting on missing Indigenous people.

McCue is Anishinaabe and a member of the Chippewas of Georgina Island First Nation in southern Ontario. He’s developed training that’s used by the CBC to ensure cultural competency amongst journalists reporting on Indigenous issues. “If we’re going to be better in the next 150 than we were in the previous 150 years [in telling these stories], we have work to do,” he said.

Looking Out For Each Other

The workshop was organized by Looking Out For Each Other (LOFEO), a project of the New Brunswick Aboriginal Peoples Council. When the group decided to hold it in Halifax, Catherine Martin, a member of King’s Board of Governors, suggested it happen at King’s. Martin is an award-winning film producer and director, writer, facilitator, communications consultant, community activist, teacher, drummer, and the first Mi’kmaw filmmaker from the Atlantic region. She is also past Chair of the Aboriginal Peoples Television Network (APTN). 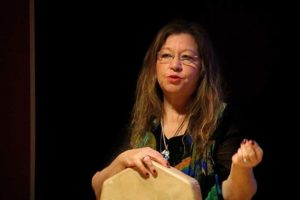 Board of Governors member Catherine Martin Martin gave opening and closing remarks and prayers at the workshop.

Given the positive reputation of King’s journalism school, the fit was natural and McCue jumped at the chance to return to his alma mater and be part of the workshop, citing the value of having working journalists, journalism instructors and journalism students all in the same room to talk through issues. Some of the practical advice imparted was that journalists can inform people to report it to police as soon as a family member goes missing (i.e. the belief that a person must be missing for a certain number of hours before the police will accept the report is a fallacy), and that including phrases in stories such as “she was known to police” communicates a strong bias.

“When that line ‘known to police’ is used it changes everything. It stops people from caring about our [missing] family members,” Martin said.

King’s journalism professor Terra Tailleur, along with Erin Moore, a journalism instructor at the Nova Scotia Community College, have been working together with LOFEO to draft guidelines for journalists reporting on stories about missing Indigenous people. They were circulated for consideration by participants and include questions reporters, editors and managers can ask themselves to facilitate journalistic accuracy, fairness and independence. Other King’s Journalism school faculty members who attended included Tim Currie, Pauline Dakin, Kelly Toughill, Kim Kierans, Fred Vallance Jones, Sue Newhook and Lezlie Lowe. “How can we educate our students, if we’re not ourselves educated first?” Tailleur asked rhetorically.

The Truth and Reconciliation Commission’s final report called on journalism schools across Canada to teach students about the history of Aboriginal Peoples, Indigenous law and treaties. In the past, such as in this 2016 CBC article, McCue has argued that learning about Indigenous Peoples is absolutely a critical tool for journalism students to have so they may understand how to operate in diverse communities. He believes Indigenous history is just as important for Canadian journalism students as learning the latest multimedia application.

Martin gave opening and closing remarks and prayers. She reminded the audience that Indigenous or not, we’re all treaty people, and she thanked everyone for coming together, saying, “We can’t do the work in two different worlds when we all live together.”