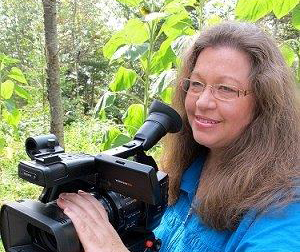 Catherine Anne Martin, is a member of the Millbrook First Nation, Truro, NS.  She is an independent international award winning film producer and director, a writer, facilitator, communications consultant, community activist, teacher, drummer, and the first Mi’kmaw filmmaker from the Atlantic region. She is a past Chair of the Aboriginal Peoples Television Network (APTN) and served on the board for the first five years of its inception. She has contributed to policy and institutional change to make culture and arts more accessible to First Nations artists. Her contributions to film, television and digital media in Atlantic Canada were recognized with a WAVE Award from Women in Film and Television Atlantic. Catherine has contributed to the development of many programs to advance the education of Mi’kmaq and Indigenous women and youth in the Atlantic Region and across the country, including the Certificate in Community Health at Dalhousie for women in Mi’kmaq, Maliseet, Innu, and Inuit communities, the Indigenous Black and Mi’kmaq Law Program also at Dalhousie, and the Indigenous Women in Community Leadership program at the Coady International Institute at St. Francis Xavier University.

Catherine currently sits as the 14th Nancy’s Chair in Women’s Studies at Mount Saint Vincent University. She holds a Bachelor of Arts in Theatre Arts from Dalhousie University, a Master’s in Education/Media Literacy from Mount St. Vincent University, and a certificate in Conflict, Negotiations and Mediation from Henson College.