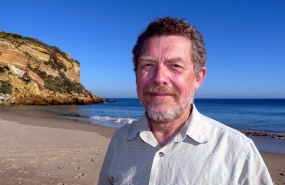 Harry Thurston is a poet and journalist and the author of more than two dozen books of poetry and nonfiction.

Harry was a contributing editor to Equinox and Harrowsmith magazines for two decades during which his articles won many awards, including a National Magazine Award for Science and Technology, two Science and Society Awards from the Canadian Science Writers Association, and a Public Affairs award from the Foundation for The Advancement of Canadian Letters for his reporting on spruce budworm spraying. His magazine features also appeared in Audubon, Canadian Geographic, International Wildlife, and National Geographic, among others.

His nonfiction books, specializing in environmental issues, have garnered four Evelyn Richardson Awards. Tidal Life, A Natural History of the Bay of Fundy also won the City of Dartmouth and the Atlantic Booksellers’ Choice Awards, and, according to Island Journal, is “destined to become a natural history classic.” His eco-biography, A Place between The Tides, A Naturalist’s Reflections on the Salt Marsh, was a finalist for British Columbia’s National Award for Canadian Non-fiction and a winner of the Sigurd F. Olson Nature Writing Award in the United States. The Atlantic Coast, A Natural History won the Lane Anderson Award celebrating the best science writing in Canada.

Harry has taught Writing Poetry at Saint Mary’s University and Magazine Writing in the School of Journalism, University of King’s College, and been writer-in-residence at Mount Allison University and Dalhousie University. Harry has served as Chair of The Writers’ Union of Canada. He holds a B Sc. in biology from Acadia University and was awarded an honorary Doctor of Letters by his alma mater in 2013.

Harry has been active in conservation initiatives, helping Nova Scotia meet its protected area’s goal. He is a passionate fly fisher. His fishing memoir, Lost River: The Waters of Remembrance was published in 2020.

As a nature writer, my eye on the world, I have always been interested in the interweaving of expository prose, personal narrative, and the language of poetry.