If there were just one defining photo I wouldn't need to show up to work each day.

As Justin Trudeau’s official photographer, Adam Scotti is closer to history in the making than most.

His road to the ringside seat began simply enough.

In 2011, Adam volunteered in Trudeau’s campaign office while finishing his degree at McGill. As a student, he worked as a photographer, photo editor and production manager for the school newspaper. He also spent his summers visiting his parents at their postings across Africa, using this time to find different assignments for local or international outlets.

After McGill, Adam headed to Halifax to take the one-year Bachelor of Journalism program at King’s. In 2012, Adam moved back to Montreal to help work on Justin Trudeau’s leadership bid. “King’s enabled me to find work as an editor and writer in Montreal so I could pay my bills while pursuing my passion for political photography,” he explains.

Adam was brought on board the Trudeau team again in 2014, this time to follow the aspiring PM during the elongated election campaign. At this point, he was practicing his passion on a daily basis, and has been doing so ever since.

“I wanted to be a photojournalist more than anything and then the political path was just a lucky series of events,” Adam says. “I was always aware of it having spent a good portion of my childhood in Ottawa. I also grew up watching my father who worked for PM Mulroney as well as a few other conservative leaders on their campaigns.”

Over the years, his photographs have formed sentences, paragraphs and chapters in an ongoing story. “I am there from sunrise to sunset, and sometimes beyond that, in order to fully document his life.”

When the COVID-19 pandemic hit, Adam’s routine looked drastically different, with social distancing in place and barely any travel.

“At the start of COVID, we only covered the PM’s daily press conference,” he explains. But for Adam, this provided the opportunity to spend more time at home with his wife and newborn. Now through the worst of the pandemic, Adam’s schedule is more regular despite travel still being extremely limited.

And his photography continues to evolve and change as he constantly strives for something new and different.

“As a photographer, we always try to top ourselves by looking for the next good photo. To save myself from a repetitive rut, I find different projects to work on,” he explains. And in his role, the possibilities are endless.

“One year, it was shooting the PM’s walk down the stairs to the House of Commons from as many angles as I could find. Another year was a black and white photo per day. Last year, I worked on trying to get one good/different photo per day on the campaign.”

As Adam plans for a day of shooting or scopes out a venue where the PM will be, he remembers one of the things he learned at King’s: “Always dig deeper” to tell as much of the story as possible through an image.

But Adam doesn’t think he has taken one photo that captures the whole story. “If there were just one defining photo, I wouldn’t need to show up to work each day.” he says. 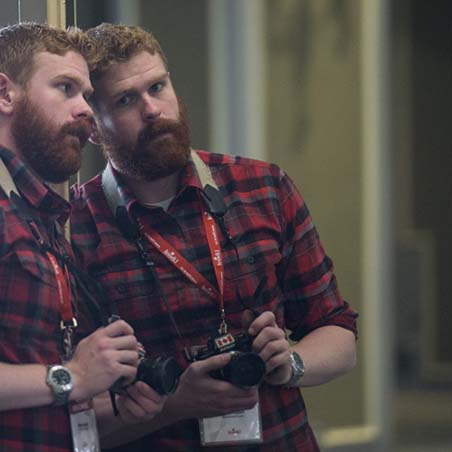