When I saw that play at King’s, my plans to attend McGill went out the window.

As a film lover and someone who became involved in school plays as a high school student in Dartmouth, Alex McLean knew from a young age that he wanted to have a career in the arts “in some way.” When making those big decisions as to where he would attend university, Alex set his sights on McGill for his undergrad, with the intention to apply to film school after.

All of that changed when he attended a play staged by the King’s Theatrical Society (KTS).

“A friend of mine had a brother who was in the Dalhousie Theatre Department,” says Alex, “and he said, ‘You guys should check out this play at King’s,’ so my friend and I went and I was blown away by what I saw.”

The production Alex refers to was called “Heroes and Villains,” and it was written, directed and performed by King’s students. While performed in The Pit, it also took place in classrooms, in the basement of King’s, and in the Wilwerth Garden next to the New Academic Building. The audience followed the actors from location to location.

“I had never seen theatre like this,” says Alex, “and today, in my role as Co-Artistic Director with Zuppa Theatre, we perform this same type of show, one that goes beyond the typical stage setting. So that experience had a big influence on me.

When I saw that play at King’s, my plans to attend McGill went out the window. I applied to King’s and Dalhousie to do a combined degree in Theatre and Contemporary Studies. I knew I wanted to be a part of this theatre community that was King’s.”

When asked about the King’s faculty, (“The professors were amazing,” he says), Alex starts naming names to the point that there are simply too many to mention here. He also points to the faculty-led tutorials that follow Foundation Year Program lectures as a high point of his King’s experience.

“The lecture halls and classrooms were great,” says Alex, “but then to break off into those smaller groups, and to have what you heard at a lecture get broken down and discussed in this more intimate setting, this was such a compelling learning experience. Transformative, too, as in my first year alone my writing improved dramatically.”

While touching on many aspects of his King’s experience, Alex always circles back to the KTS and the influence it had on him, an influence he still feels today. He speaks fondly of a series he founded, Classics in the Quad, which had theatre students performing classic Greek plays, well, in the Quad, which is to say outdoors, just as their toga-clad forebears had done centuries before.

Alex’s first year at King’s saw three Classics in the Quad productions, one of which he directed. All very fitting, as Alex cites The Iliad, the ultimate classic of Ancient Greek literature, as a favourite text on the King’s syllabus.

“Our Iliad lectures were given by Angus Johnston,” says Alex, speaking of the long-time King’s faculty member and FYP director, who passed away in 2017. “His lectures really stuck with me and I’ll never forget his descriptions of that work.”

Alex recalls being especially moved by Dr. Johnston speaking on one of The Iliad’s most famous scenes, near the end, when Priam, the elderly King of Troy, meets with Achilles to ask him to return the body of his son, Hector, whom Achilles had killed in battle, a scene which prompts many to see this great war epic as an anti-war story.

Alex also enjoyed studying Plato’s Republic and mentions that one of Zuppa Theatre’s most popular and enduring productions is an adaptation of Plato’s Symposium, called “Pop-Up Love Party.” Alex sees the irony in this, given that Plato was a harsh critic of theatre and its role in philosophy.

“So even that, I think about to this day,” says Alex. “Plato’s view on the theatre given that the theatre has been my primary occupation. So that issue of the role of theatre in society is something I always think about—and that started with my study of Plato at King’s.”

Zuppa Theatre describes its “Pop-Up Love Party” as, “A reimagining of Plato’s Symposium in its quest to define love with all its plagues and pleasures.” Billing itself as a “show for five senses,” the production includes a tasting menu of snacks. But as the theatre company makes clear, “This ain’t no dinner theatre. It’s a philosophical feast.” 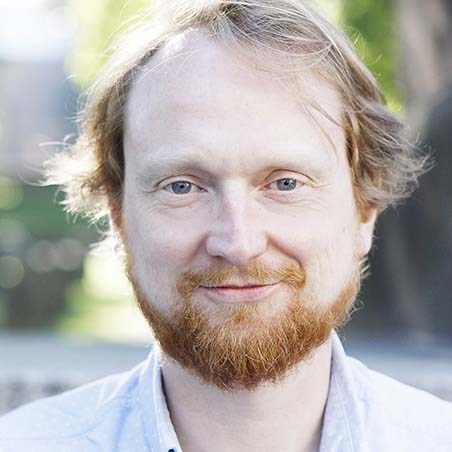