Bachelor of Arts (Hons.), History of Science and Technology and Classics, 2008

For me, as a science writer, communicator and historian, it’s all about using stories to teach and inspire people.

When Amy Shira Teitel looks up at the night sky she sees not just the twinkling lights, she sees stories.

It was the story of the first moon landing that inspired her. Amy was just seven years old and she was working on a school science project on the planet Venus. She learned about Neil Armstrong and that first small step, that giant leap. That hooked young Amy. She would go on to be, in her words, “a professional space history nerd”—writing and broadcasting, speaking and blogging about her passion.

A key point in that journey was Amy’s time at King’s. She enrolled in the honours History of Science and Technology (HOST) program combined with Classics. It was a great fit.

“One of the best things I learned at King’s is that the history of science is an actual discipline. I love science, but I am a storyteller. So, HOST opened up my eyes and allowed me to write about science in a way that works for my brain.”

She also developed an academic rigour that has been so important to her work as a science historian. My training from King’s has taught me how to be more critical in my research – one perspective is not the final word,” she says.

Amy went on to earn a master’s degree in science and technology at York University. But academia wasn’t her calling. Writing about space was. She has written for major outlets such as Time, The Guardian and Scientific American. She started a blog and a YouTube Channel called The Vintage Space, which now has more than 345,000 subscribers. She has done a TED Talk, gives speeches and has appeared on TV for the Science Channel and was a co-host of DNews on the Discovery Channel, among other networks. It’s a millennial’s CV.

“I never thought this would be my job. I thought I would be an academic historian but that seemed too boring. So, a lot of it now is—how can I do what I love without going into academia? It’s a ‘job’ that I didn’t know existed three years ago and may not exist three years from now.”

Amy’s enthusiasm for storytelling allows her to bring historical research out of the archive and into popular discussion. Her mission is to make topics like space history more accessible and inspire her audience to continue learning for themselves.

“When you can break these things down,” she says, “you find people are curious, but they don’t have the language or they have a mental block, and they stop… I see myself as bringing people into science and history when they might not have the background for it.”

Amy has also written two books. The first, published in 2015, was Breaking the Chains of Gravity. It’s the story of spaceflight before NASA. The second, published in 2020 – also the subject of her keynote speech at the 2020 History of Science undergraduate conference – is called Fighting for Space: Two Pilots and their Historic Battle for Female Spaceflight. Amy says others have tried to tell this story, a story of women being tested for going into space but never getting there, but they got it wrong. She found a trove of personal letters and read through thousands of pages of archival material to allow the women’s own words to drive the narrative. She also brings a unique personal perspective to the story.

“This book is about women fighting for their place in a male-dominated field. That’s me. A lot of the women in the story are in their early 30s. That’s me. They were doing it in the public eye. That’s me. I’m not a pilot winning awards left right and centre, but I am a woman in a field keeping up with men and constantly having to prove myself. So, a lot of this hits home.”

But at the very core of Amy’s pursuit of the story are the curiosity and love of story that has shaped so much of her life. Her advice for young undergraduates has the same spirit. “If you find something that grabs your attention but wasn’t part of your plan, don’t turn your back on it. I didn’t think I would love HOST as much as I did. I found it and went with it and it ended up putting me on my career path. If something grabs you, stick with it and see; it might be what you need.”

Amy says, “When I come across something new, I’m thinking—well that’s neat. I’ll go read a couple of books and see what happens. I’ll see what questions I come up with.”

That could very easily lead to her next book. 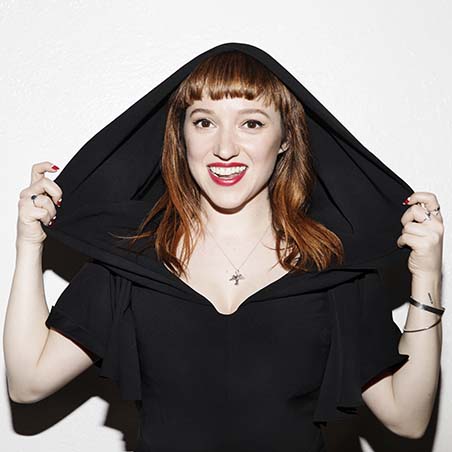