Bachelor of Science (Hons), Biology and History of Science and Technology, 2009

Our most powerful tools are our questions, and our ability to listen to stories and frame narratives.

Benjamin Langer takes out a metaphorical pencil and draws a neat line from what he studied at King’s to what he is doing today.

Benjamin currently practices comprehensive family medicine in Sioux Lookout, ON. That includes emergency medicine, inpatient medicine and obstetrics. He is also the community family doctor to the Sachigo First Nation, an Oji-Cree community accessible by plane, and in the cold months, a winter road of ice and snow.

At King’s Benjamin studied the History of Science and Technology (HOST).

“Connecting the dots between the study of HOST and a career in medicine might at first seem a stretch,” Benjamin says. “But medicine, and family medicine especially, is at its heart an historical art.”

Benjamin decided on HOST because, as he says he had “long loved stories of scientific discovery, mostly neatly packaged heroic narratives of geniuses who fought persecution and ridicule to bring us closer to a true understanding of our world.”

But opening the door to the classroom opened his mind.

“What I found in HOST was much deeper, stranger, and more thrilling: a powerful set of tools for examining the messy way that our notion of truth is established, inextricably entangled with other social, political, and economic institutions.”

After graduating from King’s, Benjamin earned his masters degree in Desert Studies at Ben Gurion University of the Negev and the Arava Institute for Environmental Studies. From there it was back to Canada for medical school at Western University and a Family Medicine Residency at the University of Toronto.

Practicing medicine, Benjamin believes, whether in the city or a small town, requires more than laboratory tests and imaging technology. He says the cornerstone is “taking an excellent history”.

“Our most powerful tools are our questions, and our ability to listen to stories and frame narratives.”

HOST, he says, provided him with many of the skills he needs to do that.

“My turn towards medicine was through encounters with a handful of incredible people whose careers brought together both the “bearing witness” of medical practice and the analytical, contextualizing eye of history and anthropology I loved from HOST.”

“This journey has led me to work with indigenous people in Northern Ontario, asylum seekers in Tel Aviv and Toronto and favela residents in Rio de Janeiro. Having learned to see through the HOST lens, it has enriched my medical training and practice and encouraged me to be skeptical of neatly packaged stories wherever I find them.”

The path from King’s through an Israeli desert and the slums of Rio, to a community at the end of an ice road is a line very neatly drawn. 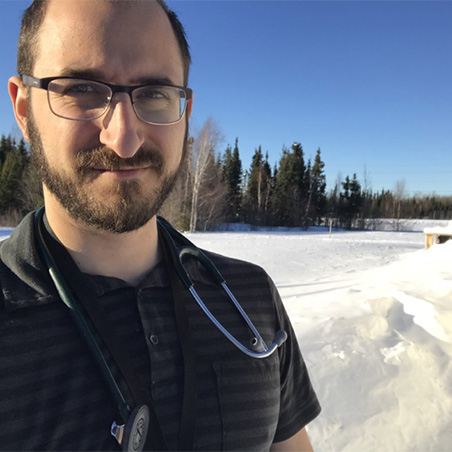