“We just kind of hit it off, complementing each other’s personality,” says Laura Vingoe-Cram.

She’s talking about her friendship with Karen Gross. Both were theatre buffs, taking advantage of what King’s had to offer.

“Laura and I were quite involved with the King’s Theatrical Society (KTS),” Karen says. “Out of the seven people on the KTS executive in 2012-13, six of us went on to work in theatre after graduation. We came at an exciting time at King’s for theatre.”

They carried that excitement and enthusiasm with them.

“When Laura graduated,” Karen says, “she realized she didn’t have access to the resources of King’s Theatre Society, so she asked me if I wanted to produce a show with her. In her living room!”

That was the early stage of what was to become Keep Good (Theatre) Company. They just didn’t know it.

Gill had come to King’s to play centre midfield for the Blue Devils soccer squad. She went on to study theatre at Dalhousie. Karen and Laura picked her to star in that living room production of Mr. Marmalade. They sold out every night.

“We didn’t really think about it as starting a theatre company. But we worked together on small things and when it was time to produce Gill’s Let’s Try This Standing we looked back on our work and thought hey, we seem to have a theatre company here.”

Let’s Try This Standing, Gill’s one-woman play chronicling her life after a horrendous car accident, put Keep Good (Theatre) Company on the map. They toured it and began work on other projects. “We work holistically,” Gill explains. “We all wear different hats at different moments. But we all have distinct strengths.”

Karen’s super power is producing – securing grants, managing actors, looking after all the details to get a production going. Gill, who is attending the National Theatre School in Montreal, is both writer and actor. And Laura says, “I guess I have committed to directing. I think of it as being at the centre of the creative process.”

There is a lot of sharing of that process in the young company. “There is something really exciting about writing a new piece and sharing it with Karen and Laura,” Gill says. “We talk about whether this is something we should apply for a grant for, do we want to go forward with it? It’s a fast process and it’s better because you have your collaborators at your side from the very beginning.”

The three theatre pros love the independence having their own company affords them. It allows them to produce the work they believe is important to Canadian theatre. As Karen says, “We want to connect with people who don’t normally go out to theatre.”

The way they connect is to provide “immersive theatre”, theatre that acknowledges the existence and the importance of the audience.

Keep Good (Theatre) Company is attracting new and younger audiences with their emphasis on immersive theatre. They are tapping into the millennials, a demographic that might not have considered theatre as an entertainment option before. It’s a testament to a very tight trio with a mission. 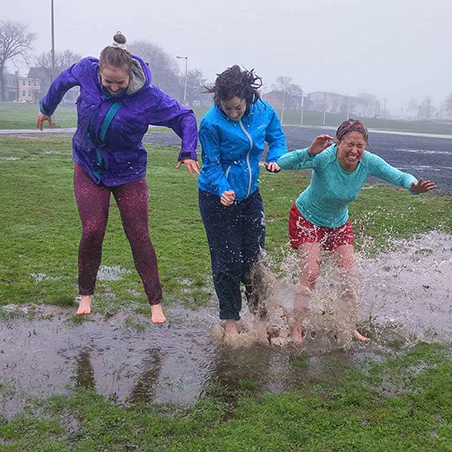