When you write about something that is so important and so specific to you, the more universal it becomes.

“I’m still so early on in my career. My best work is still ahead of me,” says Hannah Rittner.

Maybe in her eyes, however she is certainly being noticed by others, including the organizations behind the Canadian Jewish Playwriting Competition which is comprised of theatres across the country (The Segal Center, The Calgary JCC, The Harold Green Theatre, and the Miles Nadal JCC). They awarded Hannah top prize in 2019 for her play Elijah.

“I am very excited about the play, but I was really surprised it won the award,” Hannah says. “I think that’s what happens when you write about something that is so important and so specific to you, the more universal it becomes. That is what people have been commenting on, how Elijah has universal themes. Yes, it is a family we haven’t seen before–two queer female people, one of them non-binary raising a child–but we are having discussions about race and about Judaism in the play.”

Hannah’s experience at King’s gave her a hefty push into the world of theatre. She was involved with a number of King’s Theatrical Society productions, but more importantly she says, “I came into myself as a thinker at King’s”. And with the tools she acquired she has been able to channel her own story into her art.

“Ultimately what I want to do as a storyteller is put people who look like me or who are emulating the heroes I have and put them through an epic journey that transforms them, elevates them in ways that everyone can relate to.”

Hannah’s success has been building for a few years. She has worked for some of the leading Canadian theatre companies and festivals such as Summerworks, Canadian Stage, Neptune Theatre and LunaSea as a playwright, director and producer.

In the fall of 2016 Hannah was one of eight playwrights chosen from across the country for the prestigious Playwrights Retreat where she began work on a four-act play about Sarah Bernhardt. It’s a story “about heartache and ambition and what we stand to lose when we try to gain as much as we can,” she says. But it is also a story that “deeply investigates gender, women’s power and genius.”

That is a powerful theme in Hannah’s life as an artist and as an advocate. Before heading off to Stratford Hannah launched LACE Productions. It is a film and theatre collective that uses, as Hannah says, “art to tackle what it means to be a woman on the planet and to promote social change.” The company’s first production, a play Hannah wrote, is called The Unbelievers. It was the first live production to tackle the torture, the sexual slavery and the sheer ugliness of the Yazidi genocide in northern Iraq by ISIS.

Hannah, because of her research and political strategy on behalf of the Yazidi community, became a friend of Nadia Murad. Nadia won the 2018 Nobel Peace Prize for her advocacy and has spoken to the UN and other world leaders. Hannah was Nadia’s political strategist when she campaigned for the rights of the Yazidi community both federally and provincially. The two are still friends.

Hannah’s most recent award comes from her alma mater. In the spring of 2020 King’s announced that she was the recipient of the Meraki Kudos Young Alumni Achievement Award.

The word “meraki” is Greek and is used to describe someone “doing something with soul, creativity or love”. Hannah says the award means a lot. 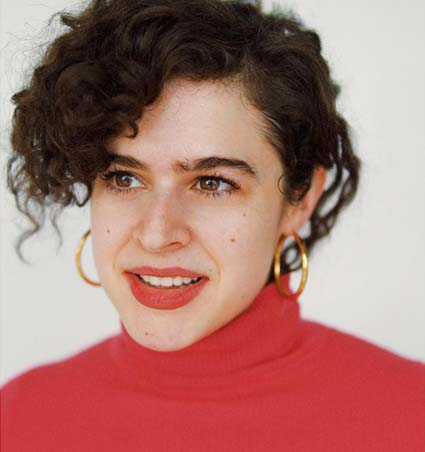