I realized that music was what was missing from my life.

For some it’s the intellectual rigour. For others it’s the friendship, or playing for the Blue Devils or the myriad traditions that keep King’s strong.

For Isabelle, it’s a special place on campus.

“The pivotal moment for me at King’s was when I went into the Chapel and I heard Paul Halley, the director of the King’s Chapel Choir, playing the organ,” Isabelle explains. “It was in that moment when I realized that music was what was missing from my life. Not only that, I realized I needed to learn the organ!”

And so she did.

Isabelle came to King’s from Newfoundland at her mother’s suggestion. The Foundation Year Program (FYP), Isabelle was told, would give her a chance to experience university life, to learn how to think critically and learn how to write essays. So she dug in, choosing math as an elective. The next year she decided to major in math with a minor in music. Then came that trip to the Chapel.

“I realized maybe I had this backwards. I got to the point where I realized music was what I wanted to do, what I should be doing.”

Isabelle’s main love was the piano and she would visit the Chapel when she could to practice that instrument and then the organ.

“That space has always been quite kind to me and I am very thankful for it. It’s a beautiful space with good acoustics. I had many formative moments in the Chapel.”

Such as the time when Isabelle was preparing her portfolio submission to the Fountain School of Performing Arts, part of Dalhousie University. The King’s/Dalhousie special relationship makes it easy for King’s students to study at both.

“I had this moment of inspiration in the Chapel when I was practicing the organ. I took a moment to just do some improvisation and this eight minute piece just kind of came out of me and I knew I had to write it down and put it into my portfolio.”

Isabelle was admitted to the Fountain School and earned her Bachelor’s degree just as the pandemic was shutting things down. Undeterred though, and anxious to “escape her bubble”, as well as add some international flavour to her music, Isabelle looked east to continue her education. She had become intrigued with Iceland as a country and as a place with a huge musical impact. She was inspired in particular by the composer Hildur Guðnadóttir who had written among many other works the soundtrack for the HBO Chernobyl series.

Isabelle was taken with the Icelandic sound. She applied and was accepted into a Masters program in music composition at the Iceland Academy of the Arts in Reykjavik.

Isabelle had two full months in the country in the fall of 2020, absorbing the inspiration of her new surroundings. She says, “the land really does feel alive, which it is. It’s volcanic.”

But then the pandemic sent her packing. She went home to Newfoundland but is determined to return to finish her degree—with luck in the fall of 2021. Music, as she discovered on that day in the Chapel, is her future.

“If I don’t end up with a job writing music for films or TV then I would like to get my PhD and teach. But I would be content with either. I take a lot of pleasure in teaching and talking about the things that I find so interesting and passing that passion on to a new generation. But I love composing as well. As long as music is a key component of my life I will be content.” 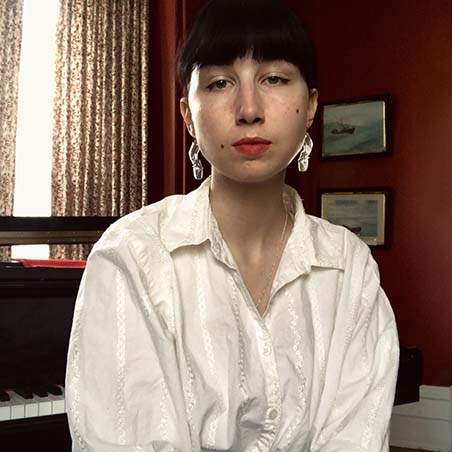