The story Jennifer Bell wants to tell is an amazing, globe-shrinking, beautiful account of a family torn apart by conflict then reunited after twenty years.

It feels impossible. It feels like it should be a movie. Jennifer is at the heart of the story.

“I struggle with thinking that what we did is unusual,” Jennifer says. “We were incredibly lucky to be able to help them.”

We’ll get to the story, but first a little background about Jennifer.

In her teens Jennifer enjoyed the sciences and had toyed with the idea of going into medicine, or studying in France. Then she discovered King’s.

“I did a pivot because I was so intrigued by the Foundation Year Program (FYP),” she explains.

FYP was everything Jennifer wanted it to be. She completed her degree, majoring in Classics. Her interest in science though was still there, and on moving to Connecticut she volunteered on an epidemiologic research project. That led to some paying research gigs giving her more experience. That helped when she and her fiancé, Andreas Katsouris, moved again, to Washington, DC.

“I got a job at the National Academy of Sciences. I worked on a huge range of health policy areas there, and then I was a manager at a think tank working on everything from vaccine safety to urban design, all of it in the field of public health.”

A degree in Classics may not appear to provide a clear path to that kind of work, but appearances can be deceiving.

“It’s the critical thinking I learned,” Jennifer says. “FYP and my King’s education in general prepared me for this work. It gave me confidence. King’s provides a multi- input approach to learning that’s really valuable in careers like public health or epidemiology, where you have to think critically from all kinds of angles.”

After a stint in Ukraine, and the birth of a daughter, Jennifer and Andreas moved back to Toronto where, as she puts it, “I decided to formalize the education in the field I’d been working on in Washington. I went to the University of Toronto for my Masters in Public Health.”

Jennifer currently works as a Team Lead with Small Globe, Inc., a non-profit group that works for government agencies and international organizations. “We analyze and evaluate government-funded projects on things such as maternal and child health, looking at their design and how well they were rolled out.”

While Jennifer is quite happy to talk about her education and work history, it really is “the story” – her volunteer work, that is uppermost in her mind.

So, we agree to depart from the usual conclusion of a King’s Community profile to tell you how the story goes.

In 2015, as many other Canadians did, Jennifer and Andreas along with three other couples applied to sponsor a refugee family. They anticipated it being a Syrian family as there was a national push to bring thousands of them to Canada. But their application languished.

“A year and a half later,” Jennifer says, “we got this email listing the names of people from the Democratic Republic of Congo who we were to sponsor.”

Three adult siblings were living in a refugee camp in Burundi.  Years earlier, as young children, they had been separated from their parents when their village in DR Congo was attacked by militia.

“When we asked them about this time,” Jennifer writes in a presentation she has prepared, “It is difficult for them to describe. But the overwhelming sense I have gotten is one of chaos and horror and fear. They were children, and they were terrified, and they clung to each other, and they ran.”

For all they knew their parents had been killed in the attack.

But now, this chance for a new life for them in Canada.

In September of 2017 the three siblings, along with the elder sister’s two young daughters arrived in Toronto and met their sponsors. The Congolese family brought gifts. This, after years in a refugee camp.

Jennifer’s group helped them find a place to live and supported them over the next year as the family took English lessons and settled in to their new country.

Then one day the siblings told Jennifer that a man from his village in Congo, who had settled in Calgary, had contacted them. The man said he had been in Uganda visiting when he saw people he thought he recognized. He sent a photograph of two people he believed might be the parents, lost so long ago.

Jennifer writes: “To me, almost the saddest moment was when the brother said, through tears, that he didn’t know if it was them, because he had been so young when they were separated. He kept gazing at the picture and saying ‘I don’t know! I just don’t remember what my parents looked like!’”

As luck would have it Jennifer and Andreas knew someone in Uganda whom they could hire to find out if this was a scam perpetrated by desperate people, or the truth.

It was the truth. And with no hesitation a phone link was made to a refugee camp in Uganda and a virtual reunion began and continued over many conversations.

Some time later the younger sister announced that she wanted to marry a man she had met in the Burundi refugee camp. She asked Jennifer to go with her to Africa for the ceremony. Part of the trip was a visit to the camp.

“I say to people that you could live many lifetimes and never witness a mother reunited with a daughter she thought was lost forever. They called it a resurrection. To this day I still have a …” Jennifer stops talking. She makes the sound of a sort of a gasp, an emotional throat catch that describes how she felt at that moment. “There was sobbing and speechlessness,” she continues. “Everyone in the room was just —you just can’t imagine.”

Jennifer’s eyes have welled up, her hands moving quickly as she tries to convey the absolute enormity of that moment.

Jennifer is now raising money to sponsor the parents and the other relatives (there are eleven in this group now). She has sponsored another family from the DR Congo and she is now leading another sponsorship. For the casual observer it is altruism writ large. Jennifer puts it this way:

“To be honest, my feelings about refugees are not that complicated: they’re human beings like us who happen to have had some extreme misfortune visited upon them. And like children in a schoolyard who instinctively rush over and say ‘are you okay?’ when someone falls off their bike or scrapes their knee, I think we have an instinct to help and do what we can.”

It’s how to make a better world.

Find out more about Jennifer’s story and fundraising. 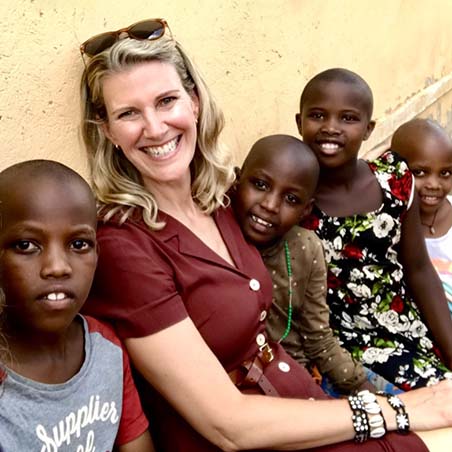