Later in life, you feel kind of amazed at how FYP shaped you, shaped your way of thinking.

Upon graduating high school, John-Alec Tynan, currently a family physician living in Sydney, Australia, came to Halifax from his hometown of Burlington, Ontario, to meet with Admissions at Dalhousie University about doing a BSc there—but something wasn’t clicking.

“I don’t know what it was, but I just wasn’t feeling it,” says John-Alec of his interview. “I recall feeling very disappointed as I walked back to the apartment of the friend I was staying with.”

His friend, who was attending Dalhousie, had an apartment on Larch Street, which prompted John-Alec to cut across the Quad at King’s, a school he’d never heard of but, as he walked across the campus, “really liked the look of.” On a lark, he went into the A&A Building and found himself chatting with the Registrar and, to his surprise, he had a very good feeling.

“I don’t know why I got such a good feeling this time, but I just did. It was strong, too. I recall flying back home to Burlington thinking, ‘That’s where I’m going this fall—King’s.’”

In high school, an outsider… but not really

“I never quite fit in at high school,” says John-Alec, “although, at the same time, I had lots of friends. Maybe it was a restlessness. I did two student exchanges, spending half of Grade 10 in France and half of Grade 11 in Luxembourg and I really loved those experiences. First, they showed me a world I knew was out there but had known nothing about; and also, they instilled a great sense of confidence in me. That’s probably why it was so easy for me to take off to Halifax, and ultimately, to Australia. I often say I was not planted where I was meant to grow. It never felt like the suburbs of Toronto were for me.”

John-Alec also says it was this new level of confidence that let him take on the great challenge that was the Foundation Year Program (FYP), for even though he’d been an A+ student in high school, he had always leaned more toward science and math and was not, by his own admission, “a big reader.”

“I did not read much at all and I knew little to nothing of philosophy and ethics and all of these classical areas of study offered by FYP. I don’t think I recognized a single author on the syllabus. But I still felt drawn to FYP, I was feeling so motivated to take it on. I saw FYP as a challenge, which is what I was looking for—and it was!”

At King’s, John-Alec quickly found the pace of FYP and the constant flow of papers he had to write was taking its toll. But he remained determined.

“I didn’t do great grades-wise,” says John-Alec, “but looking back on it now, the grades didn’t matter because at that age, eighteen or nineteen, your brain is so formative that these models of thinking you learn about in FYP, this is all imprinted on you and it stays with you a very long time. Much of what I learned at King’s, I didn’t ‘get’ at the time, yet years on, including today, it is still with me. Your brain is just so ripe for learning at that age and when you’re exposed to those texts, not just reading them but studying them and hearing lectures on them, you may not think you’re getting it—but you are. It’s been imprinted whether you realize it or not. Later in life, you feel kind of amazed at how FYP shaped you, shaped your way of thinking.”

For John-Alec, King’s was very much about the challenge. In high school, he says, he had never felt challenged, never feeling he had to think that hard. But the big lesson he took from FYP was when he realized it was not going to be easy.

“Very early on,” says John-Alec, “I had to admit to myself, ‘Oh, this is not easy, and I am actually not doing well here.’ That was the best lesson for me, to have my mind put in a place that was uncomfortable, a difficult situation I would have to manage. That may have been the greatest thing that FYP taught me.”

John-Alec’s four-year BSc was comprised of the one-year Foundation Year Program at King’s, which included a general science elective at Dalhousie, and then three years of science at Dal to complete his BSc, although he remained linked to King’s over those three years at Dal by taking elective courses in History (his minor) and Ethics.

The final three years of his BSc, his return to science from the arts, were smoother sailing than his FYP year and John-Alec had by now decided to pursue a career in medicine. While applying to various Canadian universities, a friend of John-Alec’s mentioned the University of Sydney, in Australia, as an option and, in the spirit of that walk across the Quad and into the A&A Building that day, John-Alec applied and was accepted. He took his medical degree from the University of Sydney in 2008 and has worked as a doctor in Australia ever since. 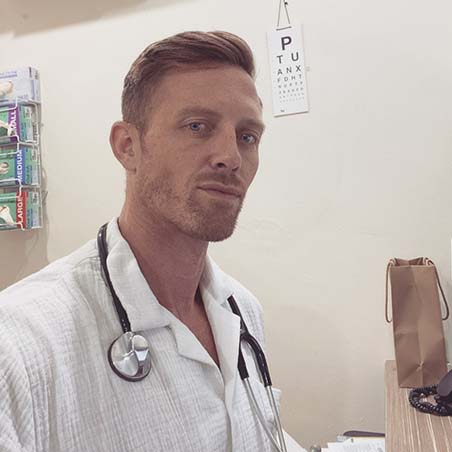