When you are a journalist you write about your passion.

“My goal is to provide a place for new voices,” Sherri Borden Colley says, “and to give people the chance to tell their stories.”

Sherri is in a unique position to do just that. She is one of only a few black reporters in Nova Scotia. Over the two decades that she has been telling stories with the Chronicle Herald newspaper and now CBC she has developed myriad contacts and built trust within the African Nova Scotian community—a place where media are not always trusted.

“That’s the joy of being a black reporter,” she says with a smile. “People pitch me stories constantly. They email me, they call me at home. That, to me, is an honour.”

But Sherri acknowledges it is a double-edged sword.

“There are expectations placed on me as a black reporter from some members of the black community. Some think I should cover every black story. But there are times when I can’t. “

Sherri says when that happens she will suggest another reporter. But that isn’t the end of what she considers her responsibility.

“I see journalism as a way to educate. I help my colleagues with wording and contacts and understanding when they write stories from the black community. And you have to constantly educate the public about what the media does.”

Sherri grew up in what she calls “humble circumstances” in a New Glasgow, Nova Scotia.

When Sherri learned what the family of Viola Desmond (Sherri is pictured above with Viola’s sister Wanda Robson) was looking for, she knew that it was a story that could shine a very intense spotlight on segregation.

In 1946 Viola Desmond was jailed and fined for defying the law and sitting in the whites-only section of a New Glasgow movie theatre. Decades later Viola’s family was asking for an official pardon. Sherri’s stories in the Chronicle Herald helped get the ball rolling, and it rolled directly into the Nova Scotia legislature where a pardon was officially granted. Sherri began her newspaper story about that monumental event with these words: “Visionary, entrepreneur, pioneer and Canadian hero.”

“I wasn’t the only person responsible,” Sherri says with humility. “Her family had been trying to get justice for her for decades. I give them all the praise.”

Her work was acknowledged in the Nova Scotia legislature.

Sherri has had to forge her own way as she built her career. When she was growing up there were few, if any, black role models in the media. At King’s in the early 90’s she was one of very few people of colour. But at King’s she learned the journalistic skills to do what she needed to do.

“I have written a lot of stories about the African Nova Scotia community because that is my experience. When you are a journalist you write about your passion.” 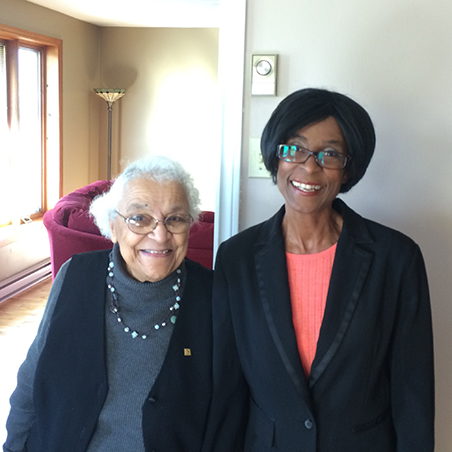