Journalism exists for the vulnerable people who don’t have a voice.

It took a motorcycle accident in Mexico, six weeks of recovery and some soul searching, but Sofia Ortega finally figured it out.

“I was having a very nice life making money, but I wasn’t happy.” she says. “I wasn’t doing what I was meant to do. I felt that journalism was inside of me.”

Sofia had a degree in marketing from the University of Guadalajara and was marketing manager for an American company. She was based in Mexico. While earning her degree she had spent a semester on an exchange program in Vancouver. That started her love affair with Canada. When Sofia recovered from her accident, she set her sights on earning a journalism degree. She chose King’s.

“King’s offered the smallest classes and closer interaction with the professors,” Sofia explains. “I quit my job and left everything behind to pursue my dream.”

Sofia earned her Bachelor then Master of Journalism.

“At King’s I learned how to behave ethically as a journalist. I learned that for me journalism is not a craft, it is a profession.”

She also developed the muscle and technique it takes to be a video journalist.

“We had to do everything by ourselves. I had to carry my own gear all the time. That helped me at Associated Press (AP).”

AP has a global competition for interns every year. Sofia applied and out of the hundreds of applicants she landed a twelve-week position—in her home country, Mexico. She learned from the senior reporters and worked hard on big stories including AP’s coverage of Mexico’s national election. When the internship was over, Sofia kept getting freelance assignments from AP. One of those gave her worldwide exposure. She was assigned to cover the migrants’ caravan moving through Central America to Mexico and then on to America in the fall of 2018. She was at the border between Guatemala and Mexico when the hundreds of migrants arrived.

“We got to the border just in time. I snuck into a very old house and carried my gear up to the roof to get shots of the barricades at the border. We were the only international news agency broadcasting live in that very moment when the migrants broke through the fence.”

The video Sofia shot—of the moment the border was breeched—was picked up by newsrooms around the world. But it was her conversations with migrants that had a greater impact on her.

“I was able to see all the families—women with babies in their arms—all under the punishing sun. They were screaming that they just wanted to work. They weren’t murderers. They just wanted the opportunity to work, to get something better for their families. I felt real shock seeing this and talking with some of the migrants. I realized they are just people like the rest of us.”

The people, their stories—they are the journalism that lives inside Sofia.

“Covering the Mexican election was a dream, but this was so much more. Politics are the same all over the world. But here, we are talking about people. Journalism exists for this—for the vulnerable people who don’t have a voice.” 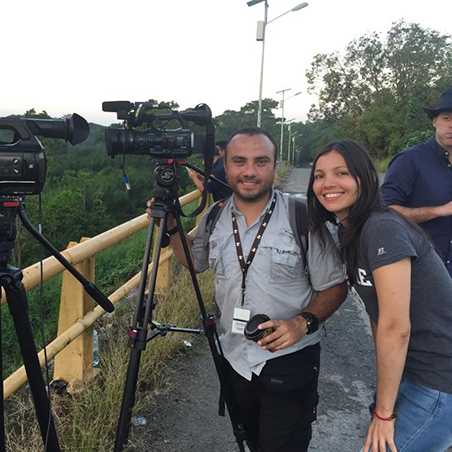