In storytelling I am a journalist first.

Trina Roache lets go a good laugh when she says, “If I wanted to be famous, I got into the wrong line of work.”

Trina, a member of the Glooscap First Nation, (Pesikitk’) works for the Aboriginal Peoples Television Network (APTN). She loves the work, and the network. She gets to tell the stories she cares about – stories about Indigenous people and issues in the Atlantic region. The audience may be smaller than those of the mainstream media but fame, as she says, just isn’t something Trina thinks about. Journalism is.

It’s what she learned at King’s.

“King’s gave me a solid education in the ethics and principles of journalism. I graduated with a portfolio and rolled right into work prepared to do journalism with the CBC in Charlottetown.”

Trina got some great experience there. But APTN beckoned. She joined the fledgling network when it was just a few years into its national broadcasting licence. She did daily news as a video journalist covering all of Mi’kma’ki, the traditional territory of the Mi’kmaq. When her third child came along, Trina took maternity leave.

“It lasted six years,” she says with a smile.

Trina re-joined APTN and before long had moved out of daily news to join APTN Investigates. It features long form journalism. Trina produces four half hour episodes each season. She does all the research, schedules the interviews, does all the shooting, the transcribing and the editing. It can be gruelling.

“I loved the adrenaline of the daily deadline and the variety of stories,” she says. “And I miss being out in the community, making contacts every day. I’m still in Mi’kma’ki but now I can do more than just scratch the surface of a story. What I love about this job is the visual storytelling. We do look for accountability, we dig deep, but I love the visual medium for telling a big story.”

That passion has been recognized. In 2014 Trina won the prestigious Canadian Association of Journalists Award for Human Rights Reporting for a three part series called Outside the Circle. More recently she picked up two Atlantic Journalism Awards; the 2018 Gold Award for feature television and the Gold award for Video Journalist, Television. Trina also won second place for Best Feature TV story from the Native American Journalism Association at their 2019 National Native Media Awards.

Trina is keenly aware that being Indigenous and reporting on Indigenous issues causes some to think of her work as advocacy. She goes back to what she learned at King’s—fairness, balance and accuracy—and to the idea that there is no Indigenous journalism, just journalism.

The difference she says between her and mainstream media reporters is her knowledge of the history and the context of Indigenous issues and communities.

They do get that from Trina on APTN. 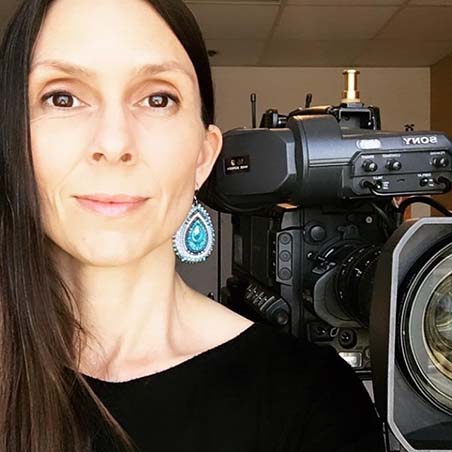